Europe has one of the most well-developed and well-maintained rail systems in the entire world. It connects the countryside with major cities and allows people to easily travel from one place to another. Using both rails and ferries, the Eurail system makes it possible to travel from Istanbul in the southeast all the way to London in the northeast, and everywhere in between. If you’re not from Europe, navigating this system can be tricky. We’re here today to introduce you to the idea of traveling Europe by train and supply you with some helpful tips for booking your tickets.

One of the reasons why you should consider exploring Europe by train is that it gives you a chance to see the towns and villages surrounding the major cities, which are usually passed over by tourists. Journeying by rail gives you an incredible view of your surroundings and allows you to explore areas that you may not have stopped in otherwise. Traveling by rail also drops you right in the center of your destination. There are no luggage limits or fees for extra bags, which makes it easy for backpackers. Plus, rail tickets are often subject to fantastic sales, so you can get some really good deals if you check online early enough. It’s truly the easiest way to explore this dense and fascinating continent.

How does the European train system work?

The European Rail system may look simple on a map like this, but in reality, the lines that connect each city only represent the major rail companies that serve that place. It doesn’t show any of the smaller public transit networks or local rail companies, which are numerous, and make a network that looks less like a map and more like a spider’s web. There are many international trains operating in Europe, each covering a specific area. For example, Trenhotel spans France, Spain, and Portugal, while Thalys covers France all the way north to The Netherlands.

Each country also has a domestic railway company, which serves cities within their own country. These tickets are cheaper but will always require a transfer if you want to leave the country. Domestic railways usually don’t require a reservation in advance.

When it comes time to book your train journey, the best thing is to plan out your ideal route, then start scouring the Internet for the best possible deal. If you’re a non-EU citizen, you can buy something called a Eurail pass, which will give you unlimited access to both domestic and international rail systems within certain countries — more on this later.

If you’re only doing one or two journeys, it’s cheaper to buy individual tickets. Looking on the Eurail or the Rail Europe website is easy since they’re both in English, and have timetables from multiple different countries. However, if you don’t want to pay a premium, and are willing to take advantage of Google Translate, you should always book your tickets via the domestic railway’s website. You’ll get the best prices, and the most accurate information.

After you book, double-check the station (many large cities have upwards of six rail stations), and how much time you’ll have to connect between cities.

If you’re a non-EU citizen and are traveling frequently between a few countries, a Eurail pass may be the best option for you. If you’re an EU citizen, you’d need to purchase an Interrail pass instead.

There are three different types of Eurail passes: a Global Pass gives you unlimited access to all 28 member countries, the Select Pass allows you to choose between two, three, or four bordering countries, while the One Country Pass is for a single country or area. If you’re under 26 years old, there are subsidies to make these passes cheaper, but for adults, a 1 month Global Pass starts at $463 USD.

In addition to train travel, your Eurail pass also entitles you to discounts on lots of other attractions, transportation, and accommodations, like museums, ferries, and hostels. If you purchase a First-Class pass, you’ll also get access to exclusive lounges, free snacks and drinks on board, and free Wi-Fi.

Try to reserve your seat in advance

One of the advantages of Eurail passes is that you can either book your seats in advance or hop on board last-minute. The flexibility of the pass is one of the reasons why it’s so popular.

If you know when you’re traveling, booking a seat online is easy, and will guarantee access to that particular train. Reserving seats is necessary for most high-speed trains as well as night trains and is recommended during the summer high season.

The Eurail website makes it easy to reserve your seat. You can do it yourself online or they have great customer service that can help you over the phone. If you want more flexibility, domestic railways operate slower but more frequent trains, which usually don’t require reservations in advance.

If you’re traveling in Europe for an extended period of time, chances are you’ll run into a strike at some point during your trip. Many European trade unions use strikes to communicate their grievances with employers, and although they seem to be more frequent than strikes in North America, they generally last for less time. They’re often publicized a few days in advance, so keep an eye on local news or your railway’s website in the days before your train journey and be prepared to make alternate arrangements.

One of the benefits of rail travel is that there are no security lines, so you should feel free to bring your own food (and drinks, discretely) on board. The food in European rail stations is often quite good, and you can buy a sandwich made with fresh bread and delicious fillings for a few Euro. Look for national specialties in each station as it’s a good place to snag some last-minute souvenirs. 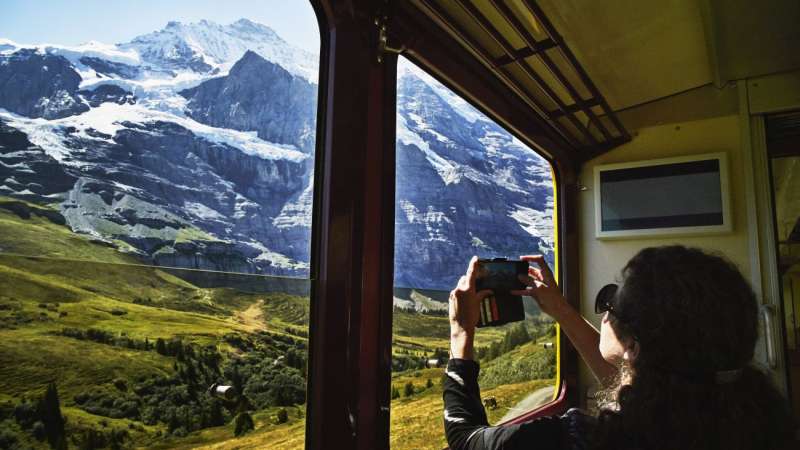