One of the largest and most underrated cities in the United States is Chicago. In fact, Chicago ranked first in Time Out’s 2018 City Life Index — a survey that asked 15,000 people around the world to rank their favorite vacation destinations — topping other highly-ranked cities like New York City, Melbourne, and London.

There are so many incredible things to do in Chicago, plus it lacks the hectic craziness of other vacation destinations in the United States. It’s a great option for a fun weekend trip, even if you’ll never see everything the city has to offer in just two days.

Chicago, also known as the “Windy City”, was named after the wild garlic plants that grew abundantly in that area. The first settler to the area was Jean Baptiste Point du Sable.

After the 1780s, the city quickly became a key piece of land to the American military. The land was ceded to the military after the Treaty of St. Louis was signed in 1816. As such, all remaining native residents were forcibly removed from the area

The city continued to grow until 1871 when a cataclysm that came to be known as the Great Chicago Fire occurred. A barn fire fanned by hot winds quickly spread throughout the city. It eventually destroyed 3.3 square miles of prime land, killing around 300 people and displacing 100,000 more.

After the fire, aid flowed into the city from the rest of the United States and United Kingdom. However, city leaders vowed that it wasn’t enough just to fix what had been damaged. They passed sweeping bills to improve building codes and raise building standards, so an event like this could never happen again. This push sparked a new movement in architecture and construction known as the Chicago School.

As a result of this movement, Chicago has stayed a center of architectural innovation ever since. Moreover, some of the most famous tourist attractions in the city are the skyscrapers of downtown, including the Willis Tower, the Fisher Building, and the Auditorium Building.

Chicago has always been a city focused on labor and industry. In fact, Upton Sinclair’s novel The Jungle was written about the city’s meatpacking industry. The conflict between workers and businesses found in the novel has always been present here.

Gangsters like Al Capone who seized power for themselves also brought notoriety to the city.

Chicago is home to many innovative chefs who have taken regional cuisines and mashed them up to create interesting and unique dishes. Many immigrants who have come to Chicago have introduced their homeland’s cuisine to the city through new restaurants and new dishes that have been adapted to suit the American palate.

Chicago-style deep-dish pizza is one of the city’s most iconic dishes. It’s a deep-dish pizza with the cheese and sauce inverted over a deep brown, fried crust. Often, there are pepperoni slices or sausage crumbles buried within the deep, gooey mess. Chains like Lou Malnati’s and Gino’s East are great places to get a slice of Chicago deep dish. Be warned that one slice is as good as a meal. This dish is huge.

Another amazing hybrid dish invented in Chicago is the Mother-in-law sandwich, a tamale topped with chili, served in an hot-dog bun. It’s thought that this dish came to Chicago with African-American migrants, who saw this dish being prepared in the South.

If you’re interested in upscale fare rather than fast food, there are several acclaimed chefs with their own restaurants in Chicago. Grant Achatz’s Alinea and Rick Bayless’s Topolobampo have each been granted Michelin stars. Alinea, in particular, has topped the list of the best restaurants in the United States several years in a row.

Chicago has always had a strong association with alcohol. During Prohibition, Chicago was a central hub for bootleggers, who took advantage of its access to Canada through Lake Michigan to smuggle in copious amounts of hard liquor. Consequently, the city never dried up.

The Green Mill Cocktail Lounge on the North Side pays tribute to the city’s bootlegger history. It used to be a favorite hangout for legendary gangster Al Capone. Now, you can explore the underground pathways that he used whenever he needed to make a quick escape. There’s live jazz almost every night, plus they offer great cocktails and lots of craft beer.

If you’re into history, the Green Door Tavern opened just one year after the Great Chicago Fire and served as a speakeasy during Prohibition. Now, it’s a bar and restaurant. This tavern pays tribute to its roots with its own secret speakeasy, The Drifter, which is hidden behind a wall in the basement.

The craft beer scene in Chicago is going strong. As such, there are tons of amazing bars and breweries that offer customers a chance to sample their house-made suds. Revolution Brewing is one of the city’s favorite spots and they have a great in-house chef.

The Aviary is run by the same owners as Alinea. They offer incredible cocktails made by genius mixologists. It won’t be cheap, but it’s a singular experience you can’t find anywhere else in the city.

If you’re downtown, there are three Chicago neighborhoods to check out.

First, The Loop is where most of the city’s most famous sights are located. It’s home to Millennium Park, the Museum of Contemporary Photography, and the Cloud Gate.

If you’re interested in architecture, a hotel or B&B within Hyde Park is a great choice. You’ll be close to the University of Chicago, as well as the Museum of Science and Industry. Staying in Hyde Park might be pricey, but it’s worth it if you like wandering around and checking out the local architecture- there are great examples of the Chicago School and Prairie Style buildings and homes dotted through Hyde Park.

If art galleries are more your scene, the River North area has the largest concentration of galleries in one single area outside of Manhattan. It’s full of boutique hotels and other accommodations that appeal to young, hip travelers with money to spend.

There are plenty of hotels within walking distance of most major sites, including the opulent Virgin Hotel Chicago and the Hyatt Regency. The Wyndham Grand is only a few minutes away from the Magnificent Mile, which is Chicago’s premier shopping areas and a popular location for window shopping.

Chicago has plenty to keep even the busiest travelers entertained. In particular, Chicago is known for its world-class comedy and theater.

The gigantic comedy franchise Second City was established in Chicago. While the franchise has expanded to Toronto and Los Angeles, the hometown campus boasts alumni like Tina Fey, Bill Murray, Dan Ackroyd, Jane Lynch, and Amy Poehler. Second City hosts shows every night. So, if you’re a comedy fan, make sure to check them out. You never know whether the person you see onstage could end up on Saturday Night Live in a few years!

Chicago also has a fantastic theater scene. Many shows come to Chicago to do a trial run before they head to Broadway. As such, it’s a good way to catch the newest productions before they start selling out. Right now, musicals like Hamilton, Dear Evan Hansen, and Les Misérables all have productions in Chicago.

Their traditional theater scene is excellent as well. In particular, the Steppenwolf Theatre Company and Chicago Shakespeare Theater have fantastic reputations.

One must-see stop on any tour of Chicago is the gigantic art installation Cloud Gate, which has been affectionately nicknamed “The Bean.” Taking a selfie here is a mandatory Chicago experience. Once you’re done checking out “The Bean”, you can head down to Navy Pier for a walk through the exhibitions and museums. 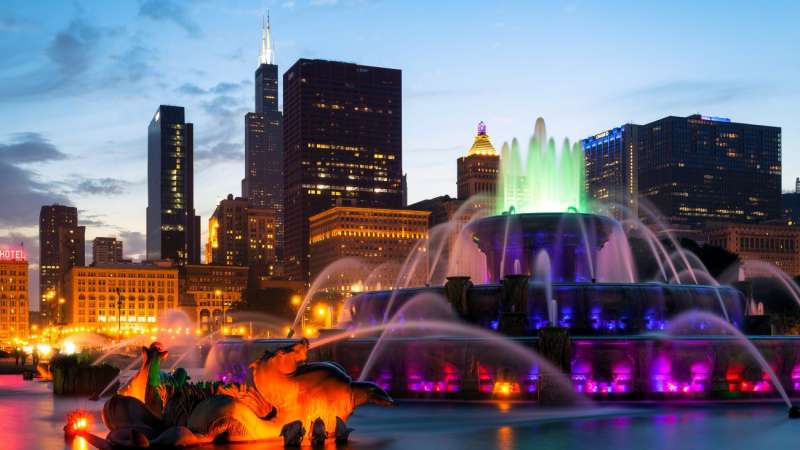