New Orleans has a reputation as one of the most fun cities in the United States. Nicknamed “The Big Easy”, most tourists come to New Orleans during Carnival, a raucous outdoor festival that celebrates the beginning of the somber Lenten season.

If you manage to get beyond Bourbon Street, there’s a vibrant city just waiting to be explored.

After its foundation by French fur traders and trappers in 1718, New Orleans passed through the hands of both the French and Spanish, as they wrangled over the fate of this influential port city. It was eventually succeeded to the United States by Napoleon in an act known as the Louisiana Purchase in 1803.

In the 18th and 19th centuries, New Orleans retained Spanish racial rules. As such, it was one of the only cities in what would become the United States to welcome non-whites as free citizens. In a terrible regression that came just decades after the Spanish left the city, New Orleans became a key port in the slave trade.

So many groups of people have moved in and out of New Orleans, which has contributed to its unique and diverse culture and cuisine. The influence of different groups is still extremely visible. The city even has its own dialect, which is referred to formally as “New Orleans English” and more informally as “Yat”.

The cataclysm that was Hurricane Katrina hit Louisiana in 2005. The levees that were meant to protect New Orleans were breached, thus causing catastrophic damage to the city. In Louisiana, there were 1,577 fatalities, and many more thousands were displaced. The population of New Orleans decreased by 50 percent within one year. As of 2017, it was back up to around 85 percent of pre-Katrina levels.

New Orleans is a city that thrives during adversity.

New Orleans had not one, but two famous local cuisines. Cajun and Creole cuisine are both native to Louisiana, although they come from two unique backgrounds.

Creole cuisine originates in the city of New Orleans. It was influenced by techniques from French, Spanish, African, and Caribbean cooks. Cajun cuisine was developed in Acadiana in southwest Louisiana, an area that was settled by French-speaking Acadian migrants from what is now Atlantic Canada. Both make use of New Orleans’ abundance of seafood, vegetables like okra and peppers, and a huge variety of spices.

Commander’s Palace is by far the most famous Creole restaurant in New Orleans. They offer a huge variety of fresh-caught seafood, but their most beloved dishes are Creole favorites of turtle soup finished table-side with sherry, gumbo, and Creole bread pudding soufflé.

Galatoire’s is the home of New Orleans’ most famous chef, Jean Galatoire. It has been owned and operated by the Galatoire family since its foundation in 1896.

If you’re looking for a restaurant where you don’t have to wear a suit, Cochon serves up incredible Cajun dishes, including fried alligator and boudin sausage with pickled peppers.

Many iconic New Orleans dishes can’t be found inside a restaurant. The muffuletta sandwich, which is made with three different types of Italian cold cuts, chopped olives, and cheese, was originally crafted at the famous Central Grocery on Decatur Street.

Beignets are a New Orleans staple, and most people wait in line for hours at Café du Monde for the opportunity to scarf down these airy, sugar-capped pastry pillows. Across the road, Cafe Beignet serves beignets that are just as good — maybe even better — with a much shorter wait time.

Bourbon Street, in the French Quarter, is one of the best-known party areas in the United States. It’s known for lively bars and brilliantly-lit strip clubs. Anyone within the French Quarter is allowed to open carry liquor, which results in an atmosphere where it’s hard to tell where the bars end and the street begins. During Carnival, parades make their way down Bourbon Street and it gets so packed that movement is almost impossible.

If you’re interested in the non-stop party atmosphere of Bourbon Street, Pat O’Brien’s, locally known as Pat O’s, is a favorite of Tulane students. On the other hand, Bourbon Heat offers everything from VIP bottle service to food in their courtyard restaurant, but prices are definitely geared towards tourists.

If you want to enjoy the music and nightlife of New Orleans without having to elbow your way through a crowd of drunk people, spilled beer, and discarded beads, look for a bar on Frenchmen Street or along the Irish Channel.

While the gigantic Hand Grenades in foot-long glasses remain a Bourbon Street favorite, there are plenty of other libations worth discovering in the city. Many of the best cocktails actually hail from New Orleans, including the Sazerac, French 75, and Vieux-Carre.

Many visitors to New Orleans choose to stay in either the French Quarter or the Garden District. These areas are both historic and full of gorgeous architecture but tend to be on the more expensive end. You’ll get the benefit of being close to many famous attractions, but likely won’t venture beyond the confines of the neighborhood. There are plenty of large hotels with reasonable room rates in the central business district, but they lack a lot of New Orleans’ characteristic flavor and charm.

If you want to enjoy the city without spending hundreds of dollars on a hotel room, the Faubourg-Marigny neighborhood is full of amazing restaurants and bars and has a few reasonable hotels and B&Bs.

Bywater, which is just east of Faubourg-Marigny, is also known for being eclectic and bohemian, with plenty of music venues, bars, and galleries to visit.

Mardi Gras is the last day of the Carnival season, which typically stretches from January to March.

If you want to catch some Carnival festivities but don’t want to deal with New Orleans on the busiest weekend of the year, January and February are great times to visit. Parades hosted by groups known as “krewes” take over Bourbon Street, and spectacular floats accompanied by musicians and dancers make their way through the crowd.

The krewes, many of which have been in existence for over a century, host balls to cap off the Carnival season. These balls are a closely guarded secret and entrance for non-members is almost impossible — but definitely worth a shot!

Visiting New Orleans and spending your days drinking on Bourbon Street is like visiting New York City and only going to Times Square. There are so many other aspects of New Orleans that are worth celebrating, like their architecture, history, and music.

New Orleans is known for their gorgeous historical architecture, many of which can be found by strolling through the French Quarter or Garden District. The St. Louis Cathedral and the Cabildo are two of the city’s most impressive buildings. For a different view on the city’s history, visit the Backstreet Cultural Museum, which is full of artifacts and memorabilia chronicling the city’s African American heritage and culture.

If you want to get outside, City Park is a great place to spend a sunny afternoon. If animals with huge teeth are more your scene, check out the Barataria Preserve within Jean Lafitte National Historic Park, where anyone of their hiking trails could lead you into an up-close and personal encounter with an alligator. 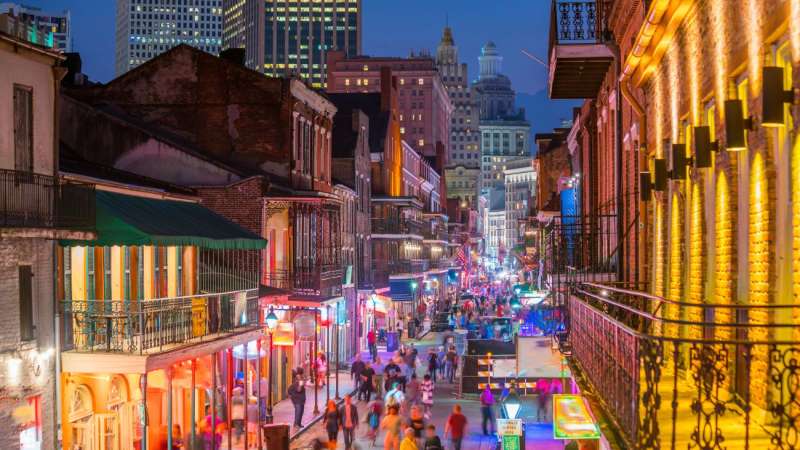