On the sliding scale of Tolkien fandom insanity, I probably fall in the upper-middle end of the spectrum. I’ve read Lord of the Rings and The Hobbit four times, own the extended editions, and have even perused The Silmarillion and Unfinished Tales. I like to casually toss out that my great-grandfather was one of the Inklings (a group of writers that included Tolkien and C.S. Lewis) and I once tried to learn Elvish.

So when I found out I’d be living in England, I was only a little excited by the prospect visiting the sights that inspired one of my favorite authors. Check out my list, and see if you can’t add a few of these spots to your itinerary! 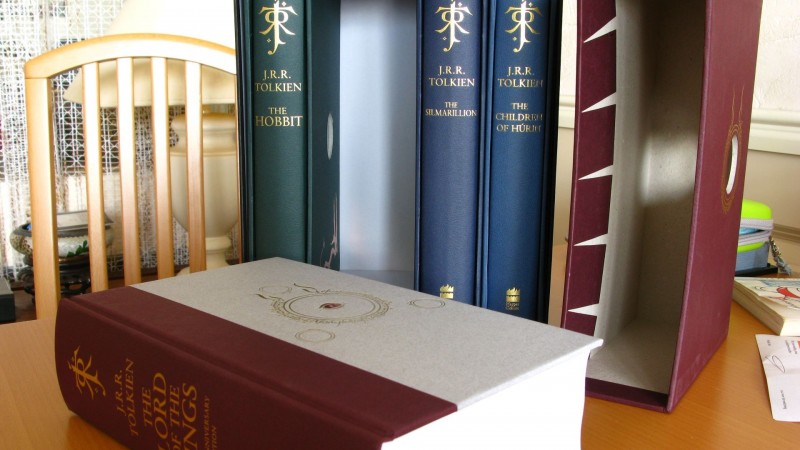 With its bustling streets, crowds of tourists, and disconcerting number of crazy-smart students, Oxford is a city with a flavor of its own. Walking among the old stone buildings, it’s easy to see how this would be a hub of inspiration for many writers throughout history. 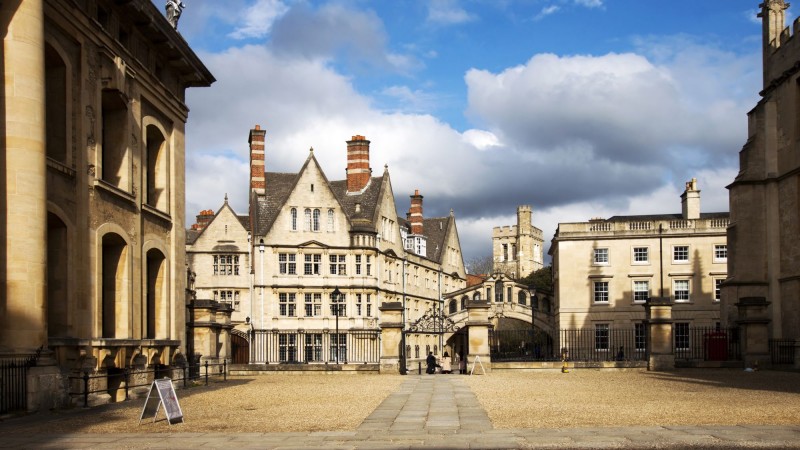 The Eagle and Child is a pub off the main street where the aforementioned Inklings used to meet for a pint while they discussed their various writing projects. It serves great drinks and food. (I highly recommend the fish and chips! And not just because it’s the British thing to get—the Eagle and Child has a great batter, and the plate is one of the best you can get in southern England, according to me and a few critics.) If you take a table in the main room, right across from the bar, you’ll be where the Inklings used to sit. The walls have pictures of the famous writers, and there’s even a plaque dedicated to the group.

Now, an Oxford local might raise a skeptical eyebrow at the claim that the Eagle and Child was the place the Inklings met. (It seems they frequented many pubs in Oxford.) But the pub is a nice stop in its own right, with plenty of character despite being a Tolkien and Lewis hotspot. 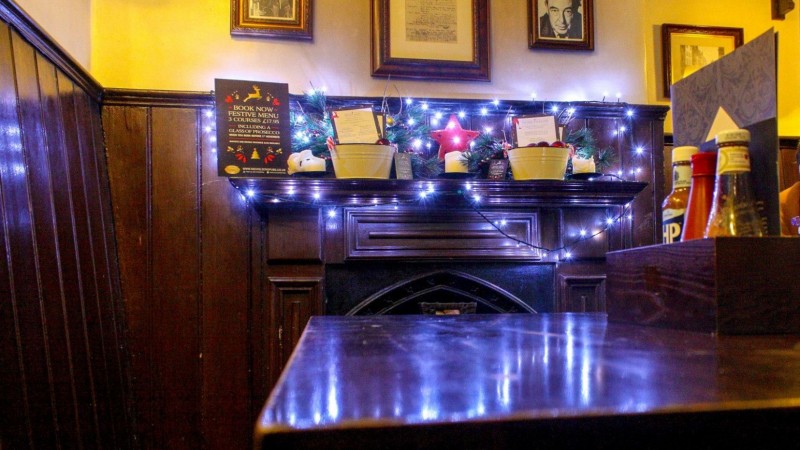 Another Tolkien sight is farther from city center. Tolkien and his wife are buried at Wolvercote Cemetery. Though not technically a place of inspiration for the books, it’s still worth a visit if you have the time. The city buses from central Oxford can be incredibly confusing for outsiders, but it’s very simple to take a cab out to the cemetery (about £5 and a ten minute drive) and catch a bus back into the center.

When you enter the cemetery, just look for the signs to Tolkien’s grave. The few times I have been, other fans have left behind letters and pens on the plot, so think ahead about whether you’d like to leave something yourself.

The best part, though? Tolkien and his wife Edith are called “Beren and Luthien” after the star-crossed lovers in The Silmarillion (mentioned in the Lay of Luthien that Aragorn sings in The Fellowship of the Ring). Altogether now: D’awwwww! 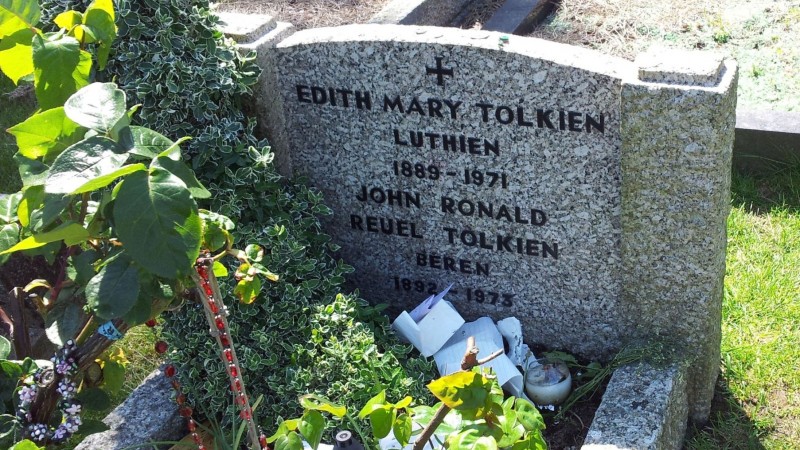 Located in the Forest of Dean, Puzzlewood is a dense wood that Tolkien frequently visited. Many believe that Puzzlewood inspired the Fangorn, Old Forest, Mirkwood, and maybe even Lothlórien. 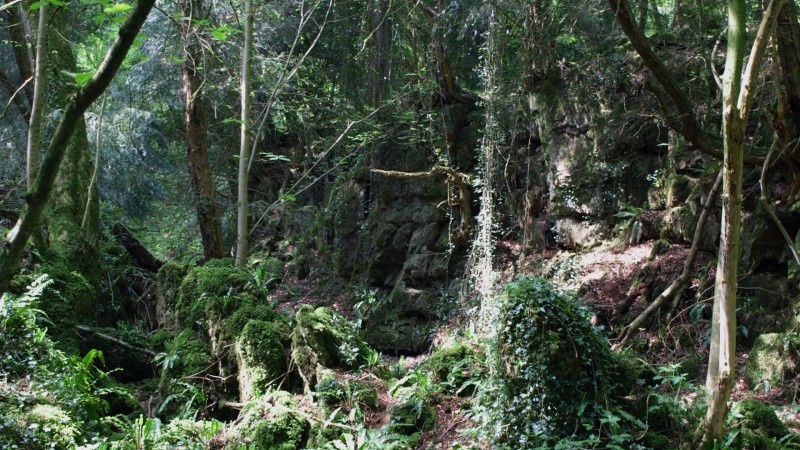 This patch of bent and ancient trees certainly has its own character. The branches block out most sunlight. Moss grows on everything. With its gullies and rickety bridges, it is easy to imagine that you have indeed gotten lost in another world.

Give yourself plenty of time to explore. If you are carrying a camera, be sure you also bring a tripod! It’s that dark. 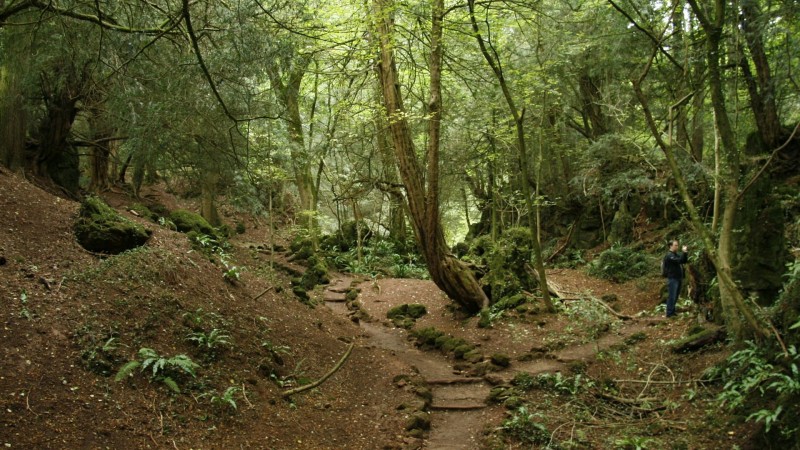 The best way to get to Puzzlewood is by car, but you can take a cab from Lydney rail station.

The Cotswolds are generally thought to be one of the main inspirations for Hobbiton, and it’s easy to see why. This area north-west of London is filled with countryside homes, rolling hills, and frolicking lambs (come spring).

While there’s plenty to see in the Cotswolds, Stow-on-the-Wold is a village particularly worthy of your attention. Why? Because it has this amazing door. 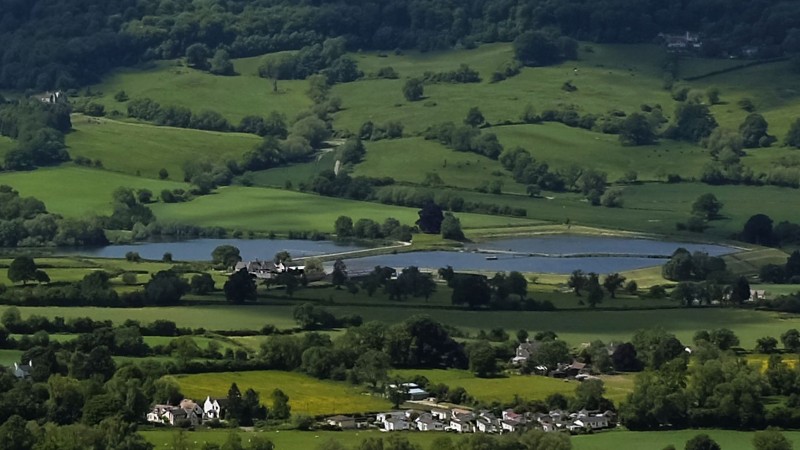 The north door on St. Edward’s Parish Church is flanked by two ancient yew trees. If it looks familiar, it’s because many think this was Tolkien’s inspiration for the Mines of Moria.

Stand beneath the bows and contemplate the fall of Durin’s folk. Then consider stopping for some tea and shopping before you head out of town! 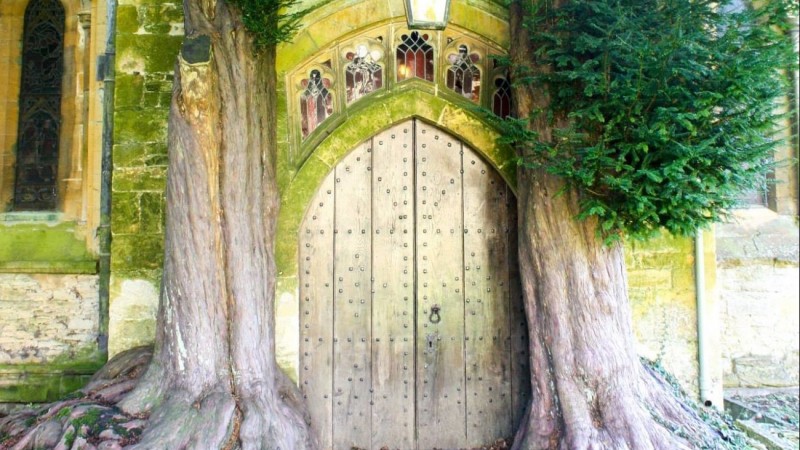