Even though the practice dates back to ancient Egypt, bowling has become widely accepted as one of the most esteemed American pastimes. There are many different types of bowling that have split off from the historical form. The two largest divisions are:

There are several gorgeous examples of bowling alleys from our history that still exist in the United States. Here are some of the coolest bowling alleys in the country.

The oldest bowling alley in the United States is in the basement of Holler House, a tavern that has stood at the corner of Milwaukee’s W Lincoln Avenue and S 21st Street since 1908. There are only two lanes, which are oiled with a spray can. There’s no automatic pin reset as the pins are put back into place by kids who get paid around $30 per day — that doesn’t include their tips, which are expected after every game.

Holler House has been run by the same family since it opened. Although it looks more like a house than a traditional bar, it’s considered one of the most famous bars in the country.

If you want to bowl while you’re there, make sure to call ahead to ensure the pin attendants are available.

In 1947, a single-lane bowling alley was built into the White House’s West Wing as a birthday gift for then-President Truman. Even though the President didn’t like to bowl himself, the alley soon became a popular hangout for staffers, some of whom founded a league. In 1955, it was moved to the Old Executive Office Building in order to make room in the West Wing.

Although it’s extremely difficult for civilians to get in and play, the White House Bowling Alley is definitely one of the most famous bowling alleys in the country. There are photos of almost every sitting President taking a turn at the lanes.

This New Orleans bowling alley is a great combination of old-fashioned with enough modern twists to keep people coming back again and again.

Mid-City Lanes Rock ‘n’ Bowl is a combination bowling alley and concert venue. You can see the stage from all 18 lanes, and live bands entertain the crowd with a variety of music ranging from zydeco and jazz to rock n’ roll and everything in between. They also have a fantastic kitchen. The kitchen offers shareable favorites like sheet pan pizzas and baskets of fries alongside Louisiana classics like shrimp remoulade and boudin vingt.

Located in Austin, Texas, The Goodnight is a favorite among local die-hard bowlers who appreciate the alley’s sense of history. Above the eight lanes, there’s a massive mural of popular bowlers from movie and TV history, including characters from Kingpin and The Big Lebowski.

The bowling lanes themselves are built-in vintage style. They sit underneath a huge dining room and alongside gaming tables, where you can play both pool and Ping-Pong. There’s also a private karaoke room, which can be rented out for parties.

If you’d like to bowl in a historic setting that hearkens back to the golden age of the 1930s, head to Action & Atomic Duckpin Bowling in Indianapolis, Indiana. Built in 1928, this magnificent bowling alley was restored in 1993 to its former glory after almost 36 years out of business.

Unlike many popular bowling alleys around the country, this alley features duckpin bowling. Duckpin bowling is a unique variation popular in the 1950s and 1960s because it’s more challenging than traditional 10-pin bowling.

If you’re waiting for your turn on the lanes, you can play on their vintage billiard table or enjoy a meal at their café, which has a full menu of BBQ, burgers, and pizza.

Another iconic Milwaukee bowling alley is JB’s on 41, a massive complex with 35 public lanes and 10 private lanes. The lanes are all furnished with comfortable vintage couches and lounge chairs. Plus, they offer plenty of bowling assistance, like lightweight balls and bumpers, for people coming with kids.

Although it didn’t open until 2012, The Alley in Charleston, South Carolina is the perfect place for people wishing they could travel back in time to the 1970s. The entire bowling alley is decorated in a retro style, down to the tufted silver couches and bar made entirely from reclaimed wooden bowling lanes.

In addition to the bowling, The Alley has plenty of retro arcade games to keep you occupied while you wait for your turn. Even better, they regularly host events like game nights, where there’s free arcade gameplay and trivia for all.

There aren’t many places that can succeed at the hybridization that Brooklyn Bowl has managed to pull off. They’ve established themselves as both a rock and roll music venue and a fun, hip bowling alley. The two ventures literally split the building down the middle, with 16 lanes on one side and the music club on the other.

Co-owned by Andre 3000, Brooklyn Bowl opened in 2009. Since then, it has attracted an impressive number of artists, including Elvis Costello, Talib Kweli, and The Roots.

Bowling costs $50 per lane per hour, but you’ll also have to buy a ticket if there’s a band onstage.

Although it is a chain, the sheer variety of experiences that you can partake in at Uncle Buck’s Fish Bowl and Grill make these some of the most interesting bowling alleys in the country. This chain is owned by Bass Pro Shops, so it makes sense that their overall theme is fish.

From the balls to the lanes to the ball chute, absolutely everything is painted to look like a sea creature. The ceiling and walls are covered in murals and there are giant fish hanging from the rafters. Each venue has its own saltwater aquarium, along with billiard tables and a full restaurant.

Gable House Bowl is a huge complex with bowling, laser tag, and a full arcade. In addition to having plenty of lanes open for casual bowlers, they have an active bowling league that’s always open to newcomers. After your match, you can head to Jack’s Place, their full bar and grill, for some post-bowling snacks.

The owners of Gable House Bowl proudly proclaim that they’re one of the only environmentally friendly bowling alleys in the country. In fact, they regularly recycle upwards of 40 tons of glass bottles and 10,000 pizza boxes every year. Moreover, they donate their gently used socks to the homeless.

Even though it’s part of The Ranch at Rock Creek, the Silver Dollar Saloon deserves recognition on its own. This small bowling alley and bar is full of rustic ambiance.

From the authentic saddles they use instead of bar stools to the silver dollars embedded into the bar for luck, this is a great place to pretend you’re back in the Wild West. They offer four lanes of bowling, billiard tables, shuffleboard, and much more. 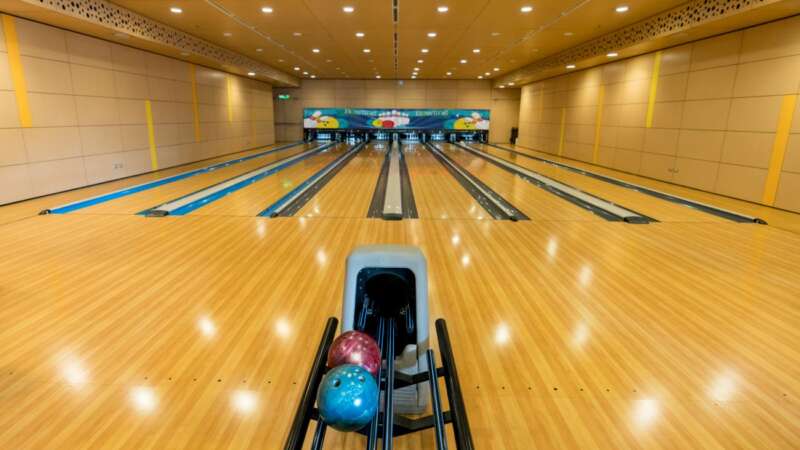