While jail time isn’t a walk in the park for any convicted felon, many tourists flock to historical prisons around the world when traveling. This is due to their mystic, history, and eerie ambiance. In fact, there are some prisons that are considered huge local attractions for tourists and residents of the area alike.

While it may seem a little crazy, visiting a local prison can provide a ton of insight on a region’s roots and culture.

Located in Philadelphia and mere blocks from the city’s Museum of Art, the Eastern State Penitentiary is now a historic site that visitors and locals flock to yearly to take in its sky-lit and vaulted cells with awe. Once considered among the most expensive and famous prisons across America, it housed the country’s most notorious criminals including Al Capone and “Slick Willie” Sutton.

The Hoa Loa Prison was originally created to house Vietnamese political prisoners by the French. Later, it was used for prisoners of war by the North Vietnamese Army during the Vietnam War.

It was sarcastically dubbed the Hanoi Hilton by U.S. prisoners of war, as occupants were subjected to starvation, torture, and sometimes death. Some of the most famous prisoners to pass through this prison include Bud Day, James Stockdale, and Senator John McCain.

While the gatehouse of Hoa Loa Prison currently acts as a museum, it was closed shortly after the war and demolished during the 90s.

Located in Tasmania, Australia, Port Arthur was a convict colony for some of the worst criminals convicted in Ireland and Britain, including rebel inmates from other jails. While the prison was open from 1833 to the 1850s, its ruins still remain today, with the insane asylum, penitentiary, and the church still standing.

In 1996, Port Arthur became infamous as the location of Australia’s worst gun massacre. A gunman opened fire on visitors who were at the site, murdering 35 individuals.

Once a high school in the capital of Cambodia, Tuol Sleng was transformed into a prison in 1975 by the Khmer Rouge Regime. It operated for about four years until the Vietnamese army closed the prison in 1979.

Prisoners were tortured into forced confessions, then were often killed after they named what they did and included conspirators. In fact, there are only a few known survivors from the over 17,000 prisoners that were incarcerated.

Tuol Sleng now stands as a historical museum in Cambodia.

While it is a popular tourist attraction of Cape Town, Africa today, Robben Island has worn many different hats over the years including leper colony. However, the island gained its infamy for housing political prisoners as part of the Apartheid Regime. Some well-known individuals that served their time at Robben Island include Kgalema Motlanthe and Nelson Mandela.

Guests and locals now flock to Robben Island on a ferry that docks in Cape Town. It also is a key breeding location for a huge African colony of penguins.

Many may be familiar with France’s Chateau d’If as the backdrop to the Alexander Dumas best-seller, The Count of Monte Cristo. The chateau housed political and religious prisoners from 1634 right through to the end of the 1800s. Sadly, those with class or wealth were given lighter treatment, but they would have to pay for this benefit.

Chateau d’If would eventually be demilitarized. It would then open as a tourist attraction in 1890.

Before the country removed itself from the slave trade in 1848, thousands of prisoners passed through Goree Island. One of the places on the island was the House of Slaves (Maison des Esclaves), a building that held these individuals until they were placed on boats to travel to the New World.

This building now serves as a museum. Additionally, it’s a UNESCO World Heritage site because many African Americans trace back their ancestral roots to the island.

The Tower of London is currently considered one of the top attractions for tourists visiting England. However, from 1100 to mid-1900s, it was a deep dark prison, which coined the phrase “sent to the Tower” as a now-infamous meaning of imprisonment.

Some famous prisoners that spent time there include:

In fact, many believe that Boleyn still haunts the Tower, as tales continue to circulate about ghosts inhabiting the building.

One of the most infamous prisons in history, Devil’s Island was a penal colony under Napoleon’s rule. Opened in 1852, the prison operated for 94 years.

Those that had plans for escape quickly re-thought those ideas, as the rivers around the building were invested with piranhas; not to mention the other side of the water towards escape being the deep and dangerous jungle of French Guiana.

An inmate named Henri Charrière wrote an autobiography about his time at Devil’s Island and the numerous escape attempts that were made while he was there. The novel was eventually made into a film, Papillon, which starred Dustin Hoffman.

One of the most famous prisons in American history is undeniably Alcatraz. The prison operated from 1934 to 1963.

Located on a rocky island near San Francisco Bay, the prison was thought to be inescapable. In fact, the inmates that tried to escape were either caught, shot, or drowned in the freezing waters that surrounded the island. While there were five escapees that were never found, it is believed that they drowned as well.

Some infamous criminals to grace Alcatraz include Machine Gun Kelly and Al Capone.

Currently, Alcatraz is one of San Francisco’s top tourist attractions with many flocking to see the eerie prison yearly. 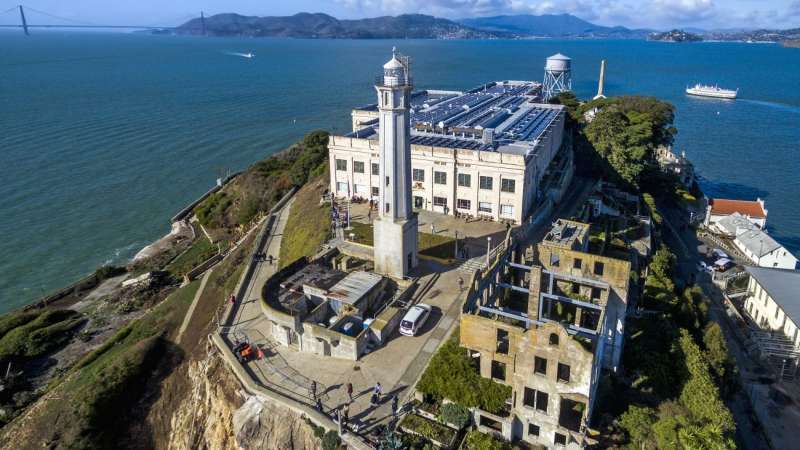