The Balboa Theater has had a tumultuous history. It opened in 1924 as a movie and vaudeville theater, but was quickly closed and reopened again as a Spanish-language movie theater under the name “El Teatro Balboa.” During the WWII years, it was used as barracks for sailors, then after the war was over, it was chopped up into apartments and sold.

In 2002, the municipal government decided to save the building, and restored it to its former glory. Now, it’s a well-beloved public theater and performing arts space where you can see live music, theater, and movies.

When you first step into the auditorium of the National Noh Theater, you may be struck by the simplicity of the room. The walls, stage, and seating are all made of different types of blonde wood, and the space is calm and serene.

The stage was built specifically for the practice of Noh theater and kyogen – two unique types of theater that are so culturally significant to the Japanese people that they have been designated as UNESCO Intangible Cultural Property. In addition to the central theater, the building also contains a restaurant and reading room.

The Minack Theater looks like an amphitheater straight out of ancient Greece, but it might surprise you to learn that this theater is actually located in a small town in Cornwall, England. It was built by an enterprising woman named Rowena Cade, who erected it almost singlehandedly when she found out that a local acting troupe was looking for a place to stage Shakespeare’s The Tempest.

The open-air theater sits overlooking Porthcurno Bay, and is open for visitors from May to September. Even if you don’t have time to see a performance there, you can pay a small fee to look around the grounds. 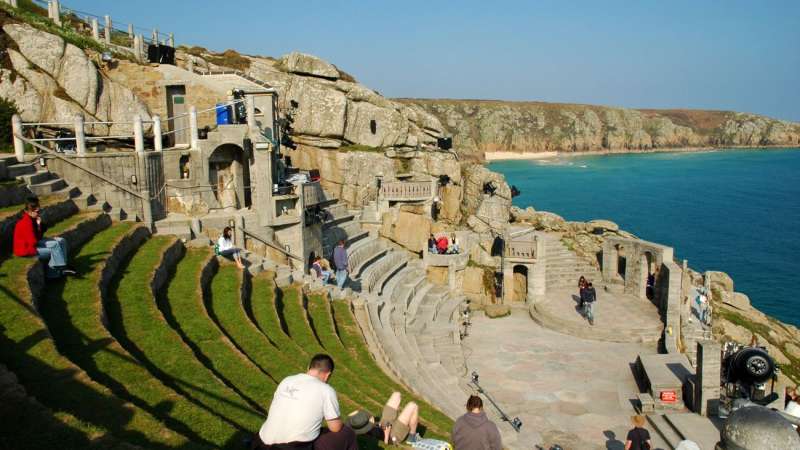