Top Neighborhoods to Live in If You Love Christmas

If you can’t wait to get into the Christmas spirit every year, it’s probably evident from the outside of your home. Many people put up traditional decorations like twinkling lights, evergreen branches, and even inflatable figures in the form of Santa, Mrs. Claus, and Rudolph the Red-Nosed Reindeer. Even though we all love Christmas, some people take it to the extreme by choosing where to live based on the town’s level of Christmas cheer.

There are tons of towns scattered around the United States that are known for their extreme decorating style, and over-the-top Christmas events. Here are the best neighborhoods to live in if you love Christmas.

Leavenworth, Washington is a Bavarian paradise that looks like it was ripped straight out of the Alpine countryside and plopped into the middle of the Pacific Northwest. There are lots of buildings in the town’s core that are built in classic Bavarian style, with gabled roofs, multiple balconies, and elaborate plaster decoration. These homes are the perfect backdrop for a Christmas light extravaganza, which takes place every year starting as early as November 30. There are carolers, hand-bell choirs, and other musical acts that perform in the gazebo on Front Street, and lots of street vendors selling everything from roasted chestnuts to hot spiced wine.

If you need a break from the lights, you can go skiing or snowboarding in one of the many hills surrounding the town. 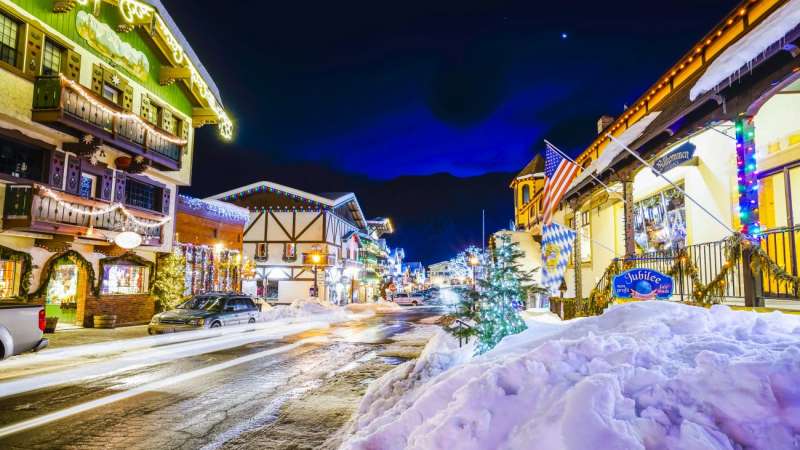 Usually, middle American states like North Carolina don’t get as much attention during the holiday season, overlooked for snowier locations like New England. However, McAdenville, North Carolina is aiming to change your mind. In the last few years, the small town’s reputation as a Christmas paradise has spread around the country, which has encouraged people to come from far away to enjoy their spectacular light display.

There’s a large lake in the middle of town, ringed with 38 massive spruce trees that are decorated every year. The houses around the lake have started a tradition of continuing the bright lights on their own trees, so the whole town is covered in gorgeous outdoor Christmas trees.

McAdenville — aka Christmas Town U.S.A. — in @go2gaston is just 1️⃣ of 6️⃣ destinations for holiday wonders across #visitnc: https://t.co/GxarBntCk9 pic.twitter.com/p7t8snAVLm

The celebrated tradition of Christmas decorations in Bernville, Pennsylvania began in 1948 when William Koziar first decorated his house for the amusement of his family. Since then, the Koziar family and their neighbors have continued the tradition, which had led to the creation of a massive Christmas village year after year.

Locals and tourists alike pay a small fee to enter the village and see all the amazing lights up close, which goes to help supplement the undoubtedly-huge electrical bills. The lights are made even more spectacular because they’re clustered around a lake, which doubles the brilliance of the colored lights.