Located deep in the Middle East, Iran’s culinary traditions have been influenced by neighboring countries like Greece, Turkey, and even Russia. Some of the most typical Iranian ingredients include saffron, dried lime, turmeric, and parsley. While it’s true that many Iranian main courses are comprised of meat, rice, vegetables, and nuts or dried fruit, these four categories combine to make endless savory, sweet, and sour delicacies.

Here are some of Iran’s greatest culinary treasures.

Sirabi (tripe soup) is a common starter course across the Middle East and Eastern Europe. In Iran, it’s called sirab shir-dun. Before alcohol was banned across Iran in 1979, it was widely considered to be a hangover cure.

Sirabi can be made with tripe from cows, calves, or lambs. Typically, Iranian sirabi features large, cooked chunks of tripe floating in a clear broth.

This delicious salad originates from the southern province of Shiraz. It is made with delicious summer field vegetables like cucumber and tomato.

Shirazi salad is often served alongside meat-heavy dishes like kebab or steak. It is a favorite in the warmer months when a chilled serving provides an excellent counterpoint to grilled meats. While this salad is like other Levantine salads like the chopped Israeli salad, it’s flavored with distinctly Iranian ingredients like mint, parsley, sumac, and the juice of unripe grapes.

The salad is set aside for an hour before serving so the flavors can mingle. After that, it’s topped with walnuts and eaten plain or with a slice of lavash bread.

Mirza Qasemi is a decadent dish of eggplant, eggs, and spices served before a meal. It’s made with the soft, smoky flesh of grilled or tandoori-cooked eggplants, which is mixed with garlic and tomatoes. Most of the ingredients are mixed together and scooped into a casserole dish, then a few eggs are broken on top. The eggs are left to cook on top of the dish then mixed in before serving.

Mirza Qasemi is eaten with rice or scooped up with pieces of lavash bread.

There are two types of soup prepared in Iran. Sup is what North Americans would refer to as either a broth or a soup. Āsh is a soup that’s thickened with lentils or other legumes to look more like a stew.

One of the most beloved types of āsh from Iran is āsh e anār, a thick pomegranate soup. It’s made with pomegranate juice, ground meat, and yellow split peas, then spiced with fresh herbs like mint, cilantro, and parsley. Right before serving, a handful of jewel-like pomegranate arils are sprinkled on top.

Many Iranians enjoy eating their āsh e anār with a drizzle of nana dagh. This is a condiment made with olive oil, garlic, onion, and mint leaves.

Like a pilaf, an Iranian polow is any dish of rice that includes vegetables, herbs, spices, and meat.

Albalu polow is a simple Iranian polow that’s made with rice, spices, and dried sour cherries. It may seem a bit strange to include dried fruit in a savory rice dish, but it adds a much-needed sour tang. Since albalu polow is often served alongside rich chicken dishes, the sour cherries cut through the fat well.

This type of rice dish can also be served as a tahdig, where the dish is cooked in a way that allows the bottom to brown. This delicious, crispy layer of browned rice is so beloved that it’s considered rude not to offer it to guests first.

Tachin is another dish where it’s possible to achieve a tahdig on the bottom.

Tachin is a baked rice cake that’s made with saffron-colored rice and often features meats and vegetables. The rice par-cooks in water first, then is mixed with egg, yogurt, oil, dried barberries, and saffron. It continues cooking until the inside is fluffy and the outside is crisp and golden brown.

Many consider qorme sabzi the national dish of Iran. In fact, it even has its own holiday. The International Qorme Sabzi Day was invented by Iranian expats who missed the food from home.

While qorme sabzi is technically a meat stew, the type of meat used doesn’t actually matter. The focus is primarily on the herbs and greens. These are usually a mixture of parsley, leeks, cilantro, mustard greens or kale, seasoned with dried fenugreek leaves. Pulses like kidney beans or split peas are added, then the entire dish is served over steamed rice or tahdig.

A typical khoresh (Iranian stew) is made with various meats and herbs. It’s flavored with tomato paste, pomegranate juice, and saffron.

No Iranian dinner is complete without at least one type of kebab. Any meat grilled on a skewer is considered kebab. Popular meat choices include lamb, veal, chicken, or beef.

Kebab torsh historically comes from the northwestern areas of the country. It’s made with beef sirloin or tenderloin marinated overnight with crushed walnuts, garlic, parsley, pomegranate juice, and olive oil. The result is extremely flavorful meat that retains excellent char from cooking over a charcoal grill.

Faloodeh is a refreshing dessert made from starchy vermicelli noodles in semi-frozen sugar syrup that’s flavored with rosewater. While the rosewater flavor is the most traditional, faloodeh with saffron, pistachio, or honey syrups are also available.

It’s a long and tedious process to make faloodeh at home. Luckily, it can be found in many restaurants and ice cream shops all across Iran.

Sohan is a sweet candy brittle made with saffron and nuts. It originates in the city of Qom, south of Tehran. Unlike North American brittles — which are made with just sugar and nuts — sohan is mixed with sprouted wheat flour, butter, egg yolks, oil, and spices.

The entire mixture is cooked until it reaches the hard crack stage on a candy thermometer. Then almonds or pistachios are stirred in and everything is poured out onto a pan until cool enough to enjoy.

Alcohol has been outlawed in Iran since the 1979 Revolution. The new Islamic Republic government enacted a law making it illegal for Muslim citizens to drink. Even though it is illegal for Muslims to drink, there are some minority groups like Assyrians and Zoroastrians who have been given permits to make alcohol for their own use.

One of the most common types of home-distilled alcohol in Iran is aragh sagi, which is made with fermented raisins. It often contains an ABV of 70 percent or more. 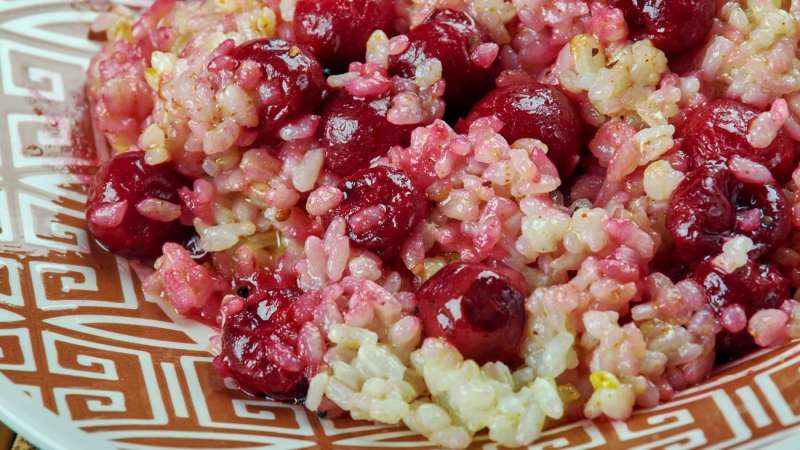