How to Eat Your Way Around an Argentinian Asado

Argentineans are serious about their asados (barbecue). Want to know how serious?

When I traveled to Argentina to meet my family there for the first time (apparently, some of my Italian ancestors got on a different boat than my great grandparents…), one of my relatives invited me to their country house for an asado so that I could meet the rest of the family.

I was expecting a mansion with fields of green grass, maybe a few horses grazing in the pasture, a swimming pool, and tennis courts. Instead, I found a quaint, open-air structure that was built for the family’s weekly asado. There were no grand parlors or game rooms. Heck, there weren’t even any bedrooms (there was a bathroom though). Instead, there was a giant parrilla (grill), a makeshift kitchen, and an open-air dining room with rows of tables and chairs.

Yes, their country house had one purpose – it was a place to eat meat. Which really shouldn’t surprise anyone as Argentina eats more beef than any other country, according to the 2015 OECD-FAO Agricultural Outlook. 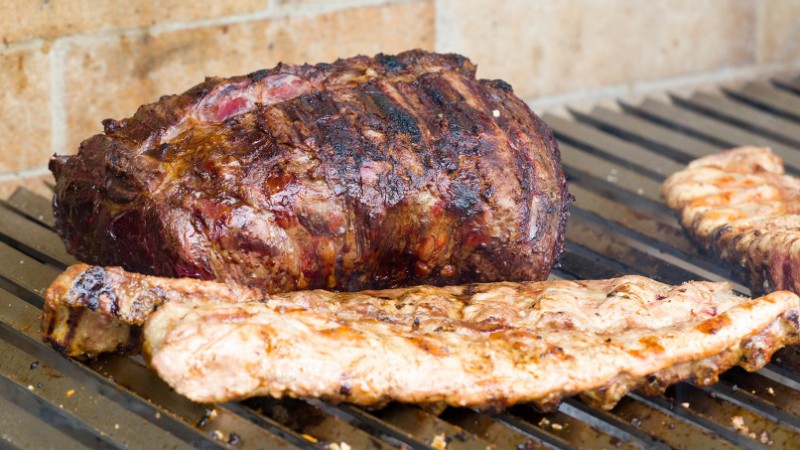 Let’s put it in numbers! On average, Argentinians consume 92 pounds of beef a year versus 54 pounds in the United States, and 23 in the European Union. The best way to experience Argentina and all its gluttony is through an asado.

What is an Asado?

An asado is about two things – food and family. Drive through any neighborhood on a Sunday afternoon, and you’ll see generations of family and friends gathering for the weekly feast. At the center of the asado is the parrilla, where pounds and pounds of meat slow cook over wood or lump charcoal.

Notice I said slow cooked. This doesn’t mean you are entitled to show up when the meat comes off the parrilla, unless you want to be tossed on the hot charcoals yourself. An asado, which can last over 6 hours, is more about the people than the succulent, finger-licking meat.

I know, I know. In a society where we take more pictures of food than people this concept may seem foreign – that camaraderie should be enjoyed in person and not via hashtagged food posts on Instagram.

Who wants to grill alone anyway? While the meat is grilling, picadas, plates of cheeses and sausages are passed to fend off the hunger pangs. The aroma of grilled meat pumps through the air, and toasts are offered to the parrillero (grill master). 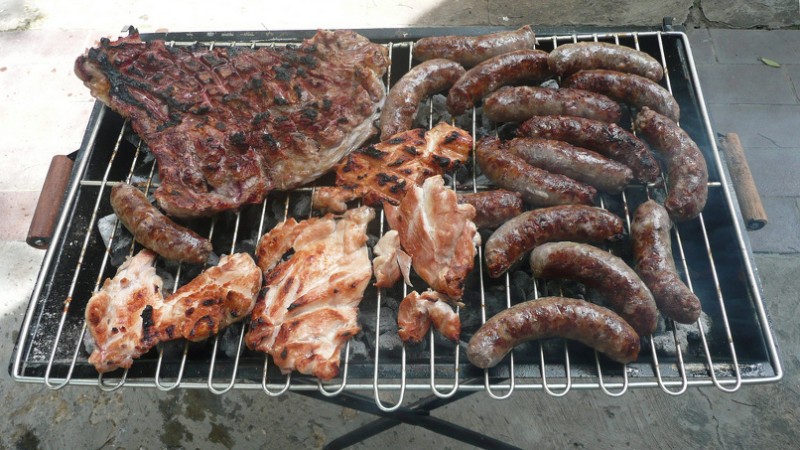 What do they eat at an asado?

Hmmm… maybe you missed the comment above that Argentina consumes more beef than any other country on the planet. You’re going to be eating beef, and nearly every cut you can think of.

To start with, chorizo and morcilla (blood sausage) comes off the parrilla to whet your appetite. Then, a buffet of cow slowly gets passed throughout the afternoon and early evening as it comes of the parrilla – strip roasts, ribeye, tenderloin, sirloin, and T-bone. Even the intestines and heart make the grill and your plate. All are simply prepared with salt, no sauces or marinades.

The meat is usually served medium. If you’re a steak connoisseur, try to hold back any requests for rare or medium-rare. This steak isn’t prepared like you’re used to. The slow cooking brings out a flavor and juiciness that is unlike anything you’ve eaten before in the beef world. And if it is a little dry, throw a spoonful of chimichurri on it (the only condiment you’ll find on the table). 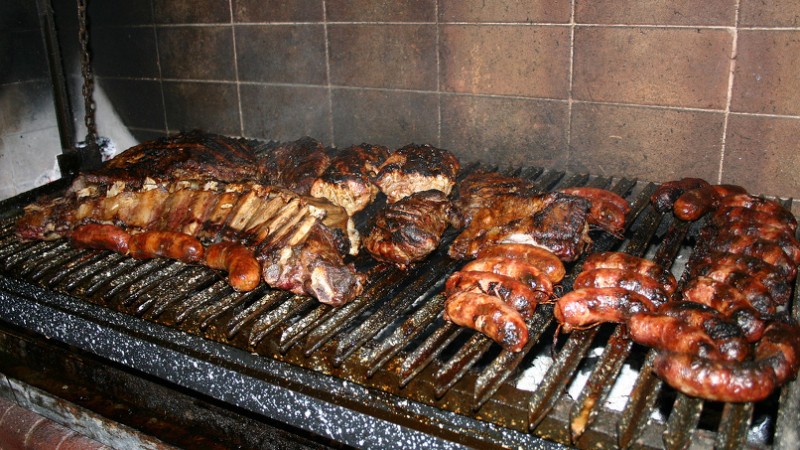