Everyone has that challenge in the back of their mind. The one that makes them sweat harder at the gym, run faster on the trail, or push themselves further in their goal setting. These challenges often represent the pinnacle of a lifetime’s work and can be seen by outsiders as simply an insane, impossible task.

For those among us who love a challenge, these long-distance marathons and outdoor challenges are activities that can only be attempted after years of training, with the right gear, and only by those who are mentally ready to undergo such a feat. Here are some of the most intense and challenging marathons in the world.

As the title suggests, The Jungle Ultra is an ultramarathon that stretches through the jungles and rainforests of Peru’s Manu National Park for an unbelievable 143 miles.

It starts 10,000 feet above sea level, which means exhaustion and difficulty breathing for most competitors. The humidity levels in the jungle are nearly 100 percent some days. Since it’s such a long race, competitors must be self-sufficient. Although there are checkpoints that provide water along the way, runners need to carry their own food and camping supplies and remain aware that this dense rainforest is full of animals who may or may not enjoy human visitors.

The marathon takes place every June and you can enter for only $3,228 USD.

The Polar Night Halfmarathon that takes place every January in Tromsø, Norway is special to locals because it’s run in the deepest part of winter when the sun barely rises at all and most of the day is spent in the strange dark blue light. Although the race is run in the middle of the day, the sun doesn’t rise until later in the afternoon, so the course is lit by torches, which serves as intense ambient light and allows competitors the chance to see the dancing Northern Lights unimpeded by city lights.

Runners have the choice of running the 5km, 10km or 21km half-marathon. The entry fee costs between $38 to $100 USD, depending on which race you choose to run.

Another race that takes place in Tromsø, Norway every year is the Midnight Sun Marathon. It’s a race that’s run the evening after Midsummer when the sun doesn’t set at all. The start times are all in the evening and racers run through the night — which doesn’t feel like night since the sun never sets.

There are a few more options than for their winter races, including the Tromsø Mountain Challenge, an intense 31-mile ultramarathon, as well as shorter lengths that can be run by children 11 years and under. Approximately 6,000 runners take part every year and this year it will celebrate its 30th anniversary.

Stretching for 155 miles, the course takes around five days to complete, so competitors must carry all their own food and camping supplies. Although water is distributed each day, it must be rationed. The baking heat of the desert is oppressively hot even in April. As such, competitors need to have intense medical examinations in their home country, as well as by race officials, before they’re authorized to compete.

The race was founded by a man named Patrick Bauer in 1984. Since then, it regularly attracts hundreds of competitors every year.

Although there are no intense natural obstacles to overcome in this marathon, the Great Wall of China Marathon is challenging because of the rough surface and stairs that make up the course. Founded in 1999, this marathon regularly hosts around 2,500 runners in a half-marathon, marathon or shorter fun run.

The course starts in the Huangyaguan fortress and traverses large sections of the Great Wall, passing through villages and valleys that are rarely seen by tourists, and up to an elevation of over 1,600 feet above sea level. Marathon runners will have to undertake the infamously steep “Goat Track” twice before the end of their race.

The legendary run from Marathon to Sparta made by Pheidippides (before he did the later and relatively shorter track from Marathon to Athens) is immortalized in the aptly-named Spartathlon, an ultramarathon that’s run every year from Athens to Sparta.

Legend has it that Pheidippides made the run in a single day. Therefore, in the Spartathlon, racers leave Athens at 9:30 a.m. and try to make it to Sparta by 8:00 a.m. the next morning. The course is around 152 miles long and the athletes who make it through are considered some of the best runners in the world.

The Pikes Peak Marathon has taken place every year for the last 63 years and is one of the most challenging timed ascents in the world.

Starting at the City Hall in Manitou Springs, Colorado, racers running the marathon must first get to the base of the mountain, then make the rest of the 13.32-mile journey up to the summit, which is an elevation gain of 7,815 feet. The majority of the marathon is run along the Barr Trail, which is rocky, uneven, and poses major challenges even to the most surefooted competitor.

This marathon is a major community event in Manitou Springs every year, so many local volunteers come out to distribute water and snacks to runners.

If you’re interested in physical challenges beyond the traditional marathon, you may be interested in the 6633 Ultra. It is run every year from Eagle Plans, Yukon to Fort McPherson in the Canadian Northwest Territories, with an option to go even further to the shores of the Arctic Ocean. The distance between the first two cities is 120 miles, but the extended option stretches for an unbelievable 380 miles.

Competitors will need to prepare themselves both physically and mentally to make this extraordinary journey. Racers must carry all of their gear on a sled, including cooking equipment, headlamps, and tons of warm clothing, as the journey can take anywhere from three days to over a week.

The highest marathon in the world is run on Mt. Everest, starting at the Base Camp and winding its way up the storied peak via a series of Sherpa trails. It’s been held every May for the last 17 years to celebrate the first recorded summiting of Everest by Tenzing Norgay and Edmund Hillary in 1953.

Depending on your skill level, you can choose to take part in the 60km Extreme Ultramarathon, the 42km Full Marathon, or the 21km Half Marathon.

Taking part in this organized challenge will also allow you to fly into Lukla Airport, which is widely considered one of the most dangerous in the world, a huge appeal to runners who are also adrenaline junkies.

Another marathon that features an adventurous locale in addition to the challenging distance is the Big Five Marathon, which is hosted by adventure company Albatros Adventure Marathons in the Limpopo province of South Africa. This area is home to the Big Five — lions, African leopards, rhinoceros, African bush elephants, and African buffalo — which runners will pass on their way to the finish line. Not only is the running surface rocky and uneven; there’s also a chance that runners could encounter wild animals at any time.

The marathon is run every June and is open to anyone over the age of 18 on race day.

The Grand to Grand Ultra is a self-supported race that’s run between two of America’s most beautiful natural wonders, the Grand Canyon and the Grand Staircase.

Taking place in six stages, runners will traverse the deserts of Arizona and Utah for roughly seven days, before finishing at the summit of the Grand Staircase. The organizers provide tents for camping each night, as well as water at each checkpoint, but after that, competitors are on their own and must carry specific gear like a compass and at least 2,000 calories of food a day in order to survive. Not to mention, almost half the course is on sand, which is notoriously hard going for runners.

The course stretches for 273km (170 miles) and will push even the most seasoned runner to their limit. 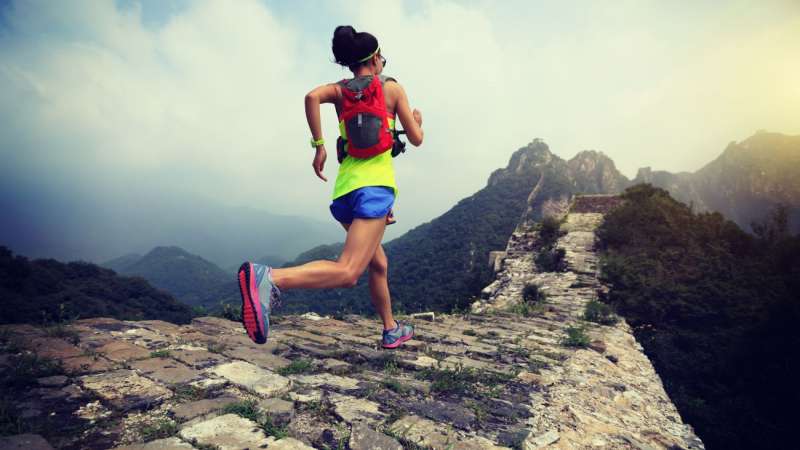