For anyone coming to visit Thailand, there’s a chance that, depending on how long you visit, you’ll learn just as much Vietnamese, Cambodian and Malaysian language as Thai. This is because the ten member nations of the Association of Southeast Asian Nations (ASEAN) have been working for years to create a European Union style economic zone of freer trade and immigration to boost the region’s competiveness. To promote the idea, infographics of the ten nations’ traditional dress, language, currency and other country-specific information cover whatever free wall space can be found. If you’re especially lucky, the effects of the upcoming ASEAN implementation (January 2016) will reach beyond your metro commute and into your wardrobe.

As I’ve mentioned before, Thai government schools are constantly looking for a reason to cancel classes and have a schoolwide celebration. Thus, it was no surprise when one day I was informed that I should come to school early the next day to prepare for…ASEAN day. I assumed this meant another day of sitting through slideshows, presentations, skits and occasional Buddhist hymns. Little did I know how foreboding a full 12 hours’ notice really was.

Not the Usual Day Off From Class

Usually the school parking lot is a crowded mess of teenagers driving dilapidated scooters to their favorite shady parking spot, giggling at the difficulty of precision driving with two and sometimes three passengers on the back. But on this particular morning the chaos had been replaced with the sixth year students erecting the metal frames of what looked like circus tents. At this point I had taught in Thailand long enough for this to be a pretty standard way to start my morning. I drove past the child labor with nothing more than a snarky comment inside my bug splattered helmet. 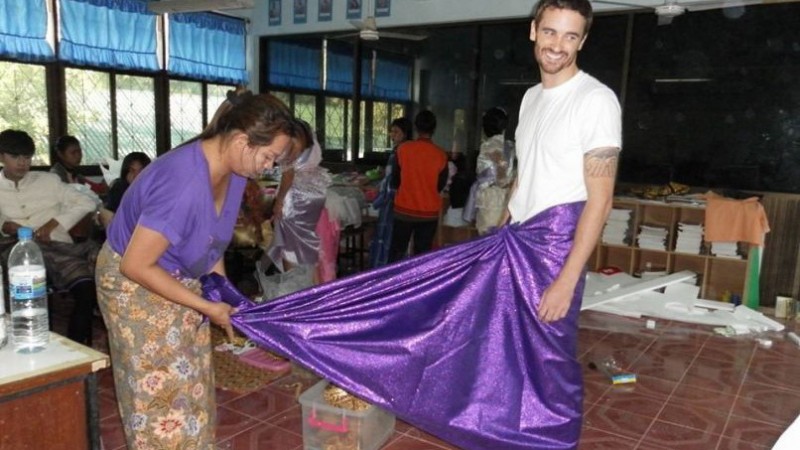 When I got to the English department, I was greeted by the pandemonium of a Broadway dressing room. One of the more fluent teachers greeted me and started explaining what ASEAN day actually was. I’ll spare you the messy details, but as I had quickly learned from teaching in Thailand, I was basically to be a mascot: the token westerner that the school threw in front of a crowd whenever they wanted to show off how progressive their language education program was. My cooperativeness in this aspect of my job wavers from day to day, but on that particular day, I was ready and willing.