In the past, if you told your friends and family that you were going to travel the world staying in hostels, they would probably be horrified thinking you were talking about homeless shelters. While there’s still some stigma attached to hostels, the reality is that they have become one of the cheapest types of accommodation and the best way to meet other travelers.

The more you choose to stay in hostels, the more you realize they come in all shapes and sizes. Despite that, some aspects of hostel life tend to remain the same. Of course, hostels may not be everyone’s taste, but the good massively outweighs the bad.

Learn How to Cook on a Budget

Although it’s possible to find some high-end hostels out there, they’re generally geared toward budget travelers. This means accommodation is cheaper because you stay in dormitories and have access to a kitchen to cook your own meals.

If you think students can be creative when it comes to cooking budget meals, think again. Travelers will do anything they can to keep the costs down and stay on the road. One week in a busy hostel is probably enough time to learn amazing and nutritious meals that will cost a buck or two to cook.

One of the biggest gaffes first travelers make when they stay in hostels is forgetting they’re sharing a room and common areas with other people. There are certain things that are totally okay if you’re staying in a private room but are a big no-no in dormitories.

For example, try to keep your stuff in cotton bags as opposed to plastic carrier bags as they can be super noisy and wake your roommates up. In the same vein, if you’re leaving the hostel early in the morning, make sure you pack the night before. And it goes without saying that if you’re going to get intimate with someone, book a private room.

Meet People from All Over the World

Apart from the cheap prices, the social aspects of staying in hostels are arguably the main reason people choose them. In fact, it’s common for couples to stay in hostels just so they can meet more people.

There’s nothing like sitting on a table where each person is from different nationality and everyone’s telling a great travel story. In fact, if you’re traveling on your own, it’s the perfect way to find a partner to explore new places with you or a big group to share a tour or activity.

Alcohol Is Acceptable at Any Time of the Day

We at Travelversed are by no means encouraging binge drinking or reckless behavior. However, if you’ve never stayed at hostels before, it’s important to know what to expect. While heavy drinking is more likely to happen in party hostels, drinking, in general, is commonplace in all hostels.

With that mind, if one day you wake up and decide to have a beer with your breakfast, don’t worry about being judged. Actually, there’s a strong possibility someone will join you, which in turn might create a chain reaction of early drinkers.

“Why Not?” Becomes Your Go-To Answer

Due to its highly sociable environment, it’s nearly impossible to be alone in a hostel. To be honest, why would you want that anyway? Because of that, there’s always something going on around you, be it an interesting conversation, a delicious potluck, or the opportunity to explore the city.

Without even realizing, you’ll see yourself saying a lot more yeses than nos, much like Jim Carrey in the Yes Man. A walking tour around the city center could easily turn into drinks at a cool bar. Then a crazy night out that ends with an unforgettable sunrise.

Bottom Bunks Are the Best

If you grew up with siblings sharing the same room, you probably fought to have the top bunk. However, when it comes to hostels, that’s definitely a bad idea.

For starters, it can be quite annoying to climb down in the middle of the night to go to the bathroom. You also always need to be careful in order not to shake the bed too much and be a nuisance to others. Also, if the dorm ceiling is low, you can’t even sit straight.

Items You Should Definitely Have with You

There are certain items you should always carry with you, so your stay goes as smoothly as possible.

If you’re looking for a good night’s sleep, make sure you pack earplugs and an eye mask. You should also bring your own towel as most hostels charge if you’d like to use one. Since you’ll have a locker, another essential item to have is a padlock. Like towels, hostels may charge to use their own padlock. Also, if you like to read in the evening, don’t forget to bring a headlamp.

People Will “Borrow” Your Stuff

The reason “borrow” is in quotes is because there’s a fine line between genuinely taking something from another traveler with the best intentions and outright stealing. In hostels, you’ll find people doing both.

If you leave your toiletries in the shower, they might be gone by the time you return or visibly used. The same goes for food left in the fridge without a label with your name clearly written on it — though sometimes people steal it anyway.

Your relationship with the hostel staff is wildly different from the staff at traditional hotels. They’re not there to just make beds, cook, and check you in and out. On the contrary, they’re like other travelers, willing to make friends. So don’t be surprised when the receptionist finishes his or her shift and joins the group to start drinking with everybody else.

Most of the time the staff are locals with expert information about the city you’re exploring. So, if they like you, you may get perks such as bigger breakfasts or discounts.

Sometimes You’ll Have to Avoid People

It would be great if all hostels were filled with lovely, easygoing, and positive people. Unfortunately, there is no such place. The moment you decide to share your living space with others, you’ll undoubtedly come across undesirable travelers.

There will be those with questionable hygiene practices, others who think hostel life is all about flirting and debauchery, and the ones who you don’t click with or are plainly annoying. In any case, have your earphones ready for the times you need to create an invisible barrier and pretend you’re listening to music.

Toilets Can Be Icky

Just to be clear, most hostels take cleanliness seriously and have spotless toilets. However, if you’re traveling during a busy period or staying at a party hostel, you may be in for a nasty surprise. It’s always worth it to thoroughly read the reviews online.

At best, you may find drains clogged with hair, abandoned soap bars, and mildly dirty toilets. On the other hand, the worst experiences involve copious amounts of vomit, spraying diarrhea, and toilets so dirty you think you might catch STDs just by being close to it.

Grooming Yourself Is the Norm

When you live in close quarters with other people, the hostel is like their home. So you’re not only going to sleep in the same room, but probably learn about their make-up routines, how long they spend fashioning their hair, and shaving patterns.

The same applies to you. Think about it: when you need to clip your nails, where are you going to do it? Or pluck persistent nostril hair? It’s actually common for travelers to cut each others’ hair with both impressive and disastrous results.

Another awesome benefit of staying in hostels is that you usually have a plethora of activities to choose from. It could be as simple as a BBQ, karaoke night, or a walking tour lead by hostel staff.

The most popular hostel activity is probably the pub crawl. This is where a group of travelers has a drink in six to 10 different bars. 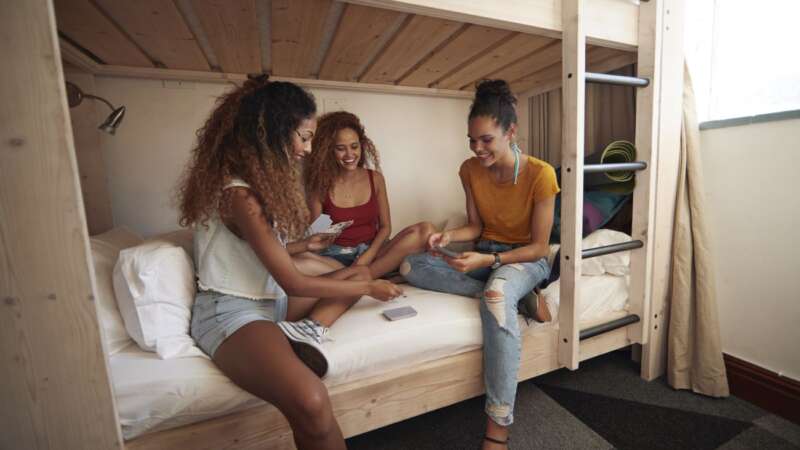