What to Do At the Wat: Advice for Visiting a Buddhist Temple

If you’re anything like me, then you’ve probably read The Dharma Bums and/or watched 7 Years in Tibet with a smoldering jealousy of the protagonist’s flirtations with the romantic eastern religion of Buddhism. Temples (or “wats”) are EVERYWHERE in Thailand, and when confronted with the opportunity to act out such fantasies, the decorum and traditions are likely to intimidate even the most suave of Brad Pitt wannabes into an embarrassed silence.

For nearly a year that was the case for me. After several casual (and often group) temple visits, I recently decided it was time for me to figure out what in the name of Buddha you are actually supposed to do at a temple visit. I conned some Thai friends into guiding me through the whole visit and this is my report.

The first thing to know about visiting a Buddhist temple is that modesty is paramount. Exposed shoulders and knees (with some leniency for the latter in male attire) are extremely taboo, and in some cases expressly forbidden.

I know you’re really repping that Urban Outfitters loose-fit tank look, but consider that Buddhist monks aren’t even allowed to touch women. (When offering food or alms, a monk must set down a traditional tray for women to set their offerings upon, to avoid any accidental physical contact.) So the least you can do is cover up those recently sunburned shoulders and trade your designer daisy dukes for some baggy elephant pants. 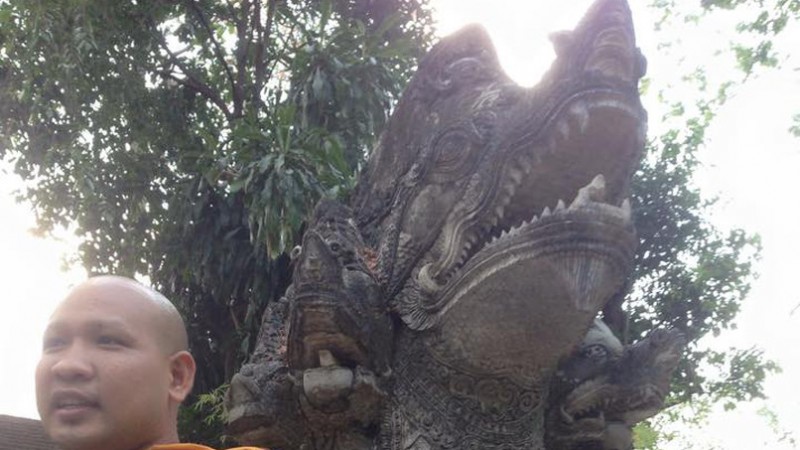 While we’re on the topic of monks and general etiquette, let’s talk about our hands and feet. Whenever you directly greet a monk (including outside of the temple), make sure to give him a respectful “wai”—the Thai version of shaking hands. Place your palms together, fingers fully extended and pointing to the sky, and raise your hands so that the knuckles of your thumbs are touching your nose and the tip of your pointer finger is near your hairline. While making this motion, give a slight bow and remember to smile!