The United States of America stretches for more than 2,600 miles at its widest, and it spans over 1,500 miles from north to south. To get around this vast country, train rides are often the ideal form of transportation. Train travel is typically more affordable than air travel, and it allows you to look out the window and truly appreciate the scenery as you zip by. Unlike car travel, you can relax and enjoy the ride rather than worrying about traffic or tolls.

There are countless train routes that cross America. These five choices represent some of the most beautiful train rides across the United States.

If you want to experience the incredible beauty of the Pacific Northwest in a single day, then riding the Cascades train route by Amtrak is the perfect choice. The journey begins in Eugene, Oregon, and heads north until it arrives in Vancouver, British Columbia.

During the first part of the trip, the train tunnels through lush green evergreen forests, which are partly why Seattle and the surrounding region is known as the Emerald City. Once you hit Seattle, you’ll be treated to stunning views of the Puget Sound. Depending on where you’re seated, you can also watch the Olympic Mountains in the distance. The total distance of the trip is 156 miles, and it takes just over four hours to complete.

Tickets cost an average of $90, making this a surprisingly affordable way to see some of the most beautiful scenery in Oregon, Washington, and Canada in a single afternoon.

There are plenty of train rides across America that takes days, but sometimes the sweetest journeys are the shortest. That can certainly be said for the Cape Cod Central Railroad, a journey that stretches for just 27 miles. Each of those miles is filled with spectacular views, bringing the luxury of Cape Cod within reach of every traveler.

The journey begins in Hyannis, the resort destination known best for its associated with the Kennedy family. The train journey winds from Hyannis all the way to Buzzards Bay. Along the way, you’ll have a fantastic view of Cape Cod Bay as well all the beauty that Massachusetts has to offer.

There are two ways to enjoy this train ride. The first, and cheapest option, is a $27 sightseeing tour with an informed guide pointing out the sights along the way. The second option, which costs $47 per person, is a dinner train trip that includes an upscale meal with your unforgettable Cape Cod views.

Every year, more than 455,000 passengers complete some or all of the Coast Starlight route. This Amtrak route begins in Seattle, Washington, and heads south to Portland, Oregon, before arriving at the final destination of Los Angeles, California.

If you’ve always wanted to see the West Coast, the Coast Starlight lets you see most of it within 36 hours. Just some of the views you’ll see from the window include the Puget Sound, the Pacific Ocean, the snow-topped Cascade Mountains, Mount Rainier and even San Francisco Bay. For the best views along the way, opt for a seat on the west side of the train car. You can break up the journey by heading to the dining car or relaxing in the lounge car.

A typical ticket for a one-way journey costs $130. If you really want to splurge, you can upgrade to a private room with your own bed. This also gives you access to the iconic Pacific Parlor Car, which boasts a domed ceiling and truly spectacular views along with food and drinks.

There’s no doubt that one of the most significant natural landmarks in the United States is the Grand Canyon. Getting there, however, can be a struggle during the busy season. Visitors are told to prepare for lots of traffic and big crowds. One of the best ways to beat the crowds is with the Grand Canyon Railway. Board the train 65 miles south of the Grand Canyon in Williams, Arizona. Then, sit back and enjoy the views as you pass through pine forests and along a plateau filled with incredible birdlife.

After passing the highest point in Arizona, you’ll get to the South Rim of the Grand Canyon. Spend time on your feet exploring this amazing landmark, and then forget about traffic as you board the Grand Canyon Railway back to Williams. Round trip tickets average $67 per adult.

Alaska’s vast wilderness and beauty is world-renowned, but some areas are so remote that it is hard to see more than a few major destinations. Travelers who make it to Anchorage should expand their horizons with a day trip on Alaska Railroad’s Coastal Classic. The journey is round-trip and begins in Anchorage. The train passes through Girdwood before arriving in Seward. After the 80-minute journey, passengers can get off the train at Seward and have seven hours of adventure.

While in Seward, you might ride a sled pulled by local dogs, go on a glacier trek or take a boat cruise along the coast. After that fun, get back on the train for the return journey to Seward. Although the journey isn’t long, there is a fully equipped dining car where you can enjoy a meal on either leg of the trip.

Tickets are $172 for the round trip. There is also the option to upgrade to GoldStar Service, which costs $351 round trip. 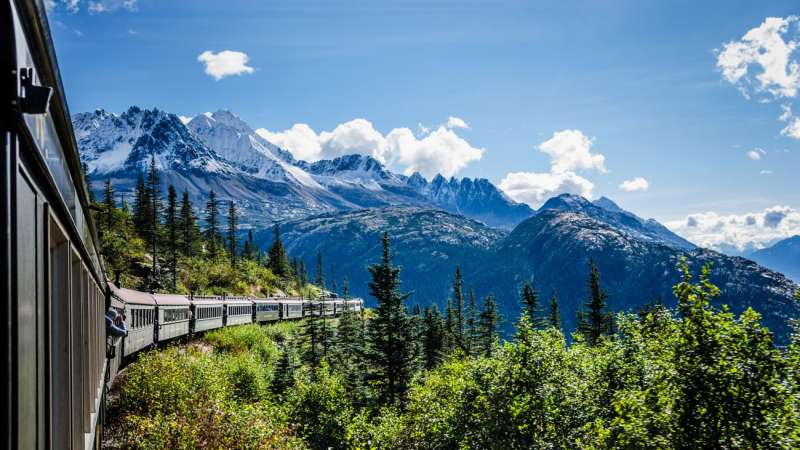