When it comes to vacation accommodations, the advent of house-sharing sites like Airbnb and VRBO opened more possibilities than ever before. Families looking to share larger accommodations or smaller groups who want amenities like kitchens and common areas are now turning to short-term rentals instead of hotel rooms. This change is forcing larger hotel chains to diversify and improve their offerings like never before. As a result, some truly incredible hotels being both built and renovated in the past few years.

If you’re going on vacation and are interested in seeing just how luxurious your hotel can get, check out some of these incredible options.

Operated by the luxury hotel chain Kempinski, the Emirates Palace hotel is one of the most expensive hotels in the world. Located in the heart of Abu Dhabi, this gigantic hotel is so fancy that it has a dress code — and not just for dinner. Guests who stay in this five-star hotel must wear smart casual or Arab national styles of dress.

When you first step into the courtyard, you’re greeted by a tiled entryway complete with dramatically lit palm trees and an elaborate water feature. The hotel has its own private white sand beach and boasts over 1,000 chandeliers.

Many estimate that the Emirates Palace cost over $3 billion to build.

The Apartment at the Hotel Connaught – London

Mayfair has been an upper-class neighborhood in London for centuries. The Hotel Connaught is the crown jewel of its hospitality industry.

Founded in 1815, the hotel still retains many of its original features, including the famous central staircase. It re-opened in 2007 after an $89 million renovation, which included a brand-new art-deco inspired grand ballroom.

The most prestigious suite at the Hotel Connaught is The Apartment, a two-bed, 2.5 bath oasis with wraparound private balcony, fireplace, and 24-hour private butler service. When you’re tired of relaxing in your room, retreat to the tranquil Aman Spa, the first to be built outside an Aman resort.

One of the most expensive resort hotels in both Europe and the Middle East is the Mardan Palace Hotel. Opened in May 2009, it’s rumored the construction cost $1.4 billion. That’s believable considering the private beach has sand imported from Egypt and each of the 560 rooms is decorated with gold, marble, and crystals.

The central feature of the hotel is the enormous swimming pool, which is currently the largest in the Mediterranean. Within the pool, there’s a sunken aquarium that contains over 2,000 fish.

In a city like Rome where most of the architecture dates from before the 18th century, it’s not enough for a hotel to just be luxurious on the inside. It must have a suitably magnificent exterior as well.

The Westin Excelsior is one of the most incredible architectural sights of Rome. Built in 1906, the hotel has served as a filming location for several well-known Italian movies, including the 1960 classic La Dolce Vita.

The hotel is close to amenities like the Villa Borghese and the Spanish Steps. However, you may never want to leave the hotel itself, especially if you’re staying in the Villa la Cupola suite. This is an incredible 7,900 square foot suite with a terrace that’s level with the hotel cupola.

One of the most iconic buildings in the entire world is the Burj Al Arab Jumeirah. As one of the tallest hotels in the world, this hotel is on its own private island just off the shore of Dubai’s Jumeirah Beach.

Instead of filling the hotel with smaller rooms to accommodate more guests, the designers opted to only build suites. Each available suite spans two floors and offers 24-hour butler service, as well as access to their fleet of chauffeured Rolls-Royces. In addition to the incredible suites, you can play tennis on their incredible floating rooftop courts or relax at the Talise Spa for a day of pampering.

It’s not every day that a hotel comes with its own mythology. However, The Plaza in New York City has been in business for so long and has catered to such interesting and famous clientele that there are literal volumes written about this iconic institution.

One of the most famous books about life at The Plaza is the Eloise series. These books follow the adventures of a sassy little girl who lives in a Plaza suite. If you have youngsters who love those books, they’ll love the special Eloise Suite, a pink suite decorated by Betsey Johnson. On the flip side, adults will love the elegant Palm Court tearoom or the Champagne Bar overlooking Fifth Avenue.

One of the most unique hotels in the world is The Boulders Resort and Spa, a Scottsdale-area hotel built into the side of a magnificent 12-million-year-old boulder formation. In addition to the well-appointed rooms and suites, there’s a championship golf course on-site and a luxury spa.

The Boulders is the perfect mix of bespoke elegance and natural beauty. Nowhere is that plainer than in their most luxurious suite, the Villa Retreat. This private, two-story retreat comes with its own pool, soaking tub, firepit, and barbecue area.

If you want to be inspired by serene beach views and swaying palm trees, then the Marquis Los Cabos is the ideal choice for you. The most incredible aspect of this hotel is the massive, vaulted lobby that opens onto the ocean.

If you’re looking for a bit more privacy, check into one of their Casitas, private suites with their own plunge pools and sun decks. Outside of relaxation, let the staff at the Marquis arrange a private wine tasting or bar hopping for your group in Cabo San Lucas.

The Al Maha Desert Resort near Dubai is the perfect retreat away from city life, while still being accessible by most forms of transportation. The resort blends in well with its desert surroundings. In fact, many of the suites are built around tents, which peek out from behind clumps of vegetation. Inside, the elegant suites are all decorated in lavish style, plus many come with their own private pool.

During the day, the resort staff encourages guests to take part in their favorite activities. You can take a turn at the archery butts, learn the art of falconry, or go on a desert safari. 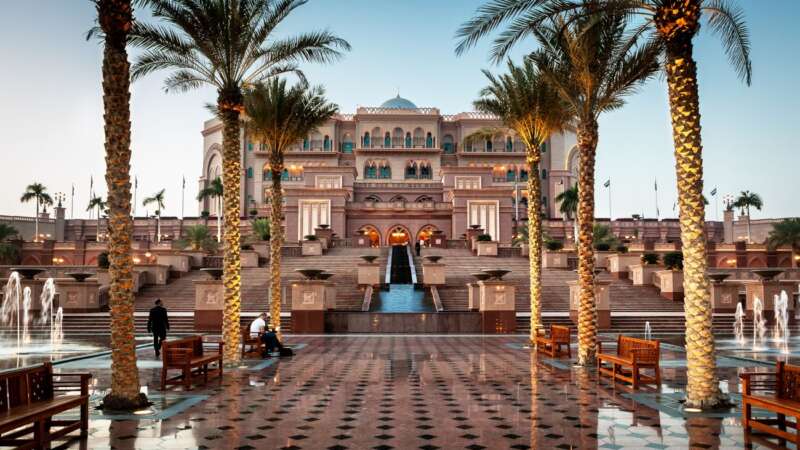