Although Canada is a vast country, it is possible to traverse it using one of the oldest methods around — train travel. Canada is connected from end to end by the national rail company VIA Rail.

Although train journeys are now actually more expensive than traveling by air or by bus, many people opt for trains because they offer a relaxed atmosphere with more space and amenities than most other forms of mass transportation. Taking the train also allows you to sightsee on your journey. In fact, many of Canada’s most beautiful regions are best traversed by trail, and bring you right up to the Rocky Mountains, or through the rolling meadows of the Prairies.

Although many people simply use the train system in Canada for transportation, some of the journeys are so scenic that they should really be considered tours in their own right. Here are some of Canada’s most beautiful train rides.

The journey from Toronto to Vancouver has been dubbed The Canadian by VIA Rail, and there truly is no better way to experience Canada.

The 2,775-mile journey starts in Toronto, the largest city in the nation, and the capital of the central province of Ontario. From there, the train heads north, crossing the provinces of Manitoba, Saskatchewan, and Alberta before traversing the Rocky Mountains and heading into British Columbia’s most picturesque cities — Kamloops and Jasper — before entering its final destination of Vancouver. You’ll see snow-covered peaks, golden fields of wheat, and crystal-blue lakes from the windowed lounge on the very top of the train.

If you want to go all out for the 3-day, 4-night journey, you can book a Prestige cabin, which comes complete with a private sitting room, concierge, and an all-inclusive meal plan designed to showcase the best that Canada has to offer. Prices range from $326 for Economy class to $3,146 for a Prestige-class cabin.

The spectacularly scenic Rainforest to Gold Rush route from Vancouver to Jasper is showcased best in the domed cars of the historic Rocky Mountaineer trains, which run between the two cities all year round.

You can run the journey eastbound towards Jasper or westbound towards Vancouver. Each journey takes five days and stops in Whistler and the small town of Quesnel along the way. Unlike other train journeys, buying a package with Rocky Mountaineer entitles you to four nights of hotel accommodations along the way. Breakfast and lunch are served on the train in their amazing glass-domed dining car. Along the way, you’ll pass amazing sights like the Fraser Canyon, Green Lake, Rocky Mountain Trench, and end your journey at the foot of the Canadian Rockies.

Prices which include all hotel costs start at $1,857 for the SilverLeaf level and range up to $2,881 for the upgraded GoldLeaf.

If your idea of an ideal vacation is to get away from it all, the Polar Bear Express, which is one of the only ways to get through northern Ontario without a car, is the best way to do it. Run by Ontario Northland, this train travels from the town of Cochrane to Moosonee, a journey of 186 miles that takes around five hours which passes through miles of deserted taiga. If you’re lucky, you can spot deer, elk, and even massive brown bears.

This journey leaves Cochrane five times a week, and passes through miniscule towns like Brownrigg, Otter Rapids, and Moose River before pulling into Moosonee. It was formerly a tourist route, but now it’s quite popular with locals as well. The railway has recently expanded their ability to carry freight like snowmobiles and canoes and can even transport a small truck. Since it’s a shorter journey, the prices are reasonable. Adult tickets cost less than $50. The best time of the year to take the Polar Bear Express is fall or winter.

The Ocean – Montreal to Halifax

Another of VIA Rail’s spectacular journeys is The Ocean, which starts in Montreal, and passes through several towns in Quebec on its way through the Atlantic provinces, ending in Halifax, Nova Scotia. Although the journey is shorter than many of its other long-distance offerings, the 1-day, 1-night trip takes you through some of the most remarkable places in the country.

Like VIA’s other cross-country trips, the train running between Montreal and Halifax is equipped with two lounges and a glass-domed observation deck. The views of the water are spectacular, and the food served on board is focused around freshly-caught fish and seafood. There are even in-car talks and lectures on local history. Even though your time on board is limited, VIA spares no expense to ensure that passengers are comfortable. The SleeperPlus cabins are cozy, while the reasonably-priced economy seats are roomy and slide out into comfortable beds at night.

The historic Kettle Valley Steam Railway was built between 1910 and 1915 and served a key role in the development of the local farming industry. Now, it serves as a popular way for tourists to get a glimpse of the gorgeous farmland in the Summerland region. Although only 10 miles of track have been preserved, the journey gives passengers amazing views of the surrounding countryside, especially as it passes along Trout Creek Bridge, which rises for 238 feet above Prairie Valley.

The railway company offers several different tour packages, each of which lasts for at least an hour. The regular journey departs six times a week, but if you’re a big Wild West fan, you can take part in the Great Train Robbery tour, which features trained riders posing as the Garnett Valley Gang riding alongside the train. Departing three times a month, this exciting tour ends with a delicious barbecue feast at the Summerland train station.

Tickets start at $25 for the regular journey, or $57 for the Great Train Robbery. 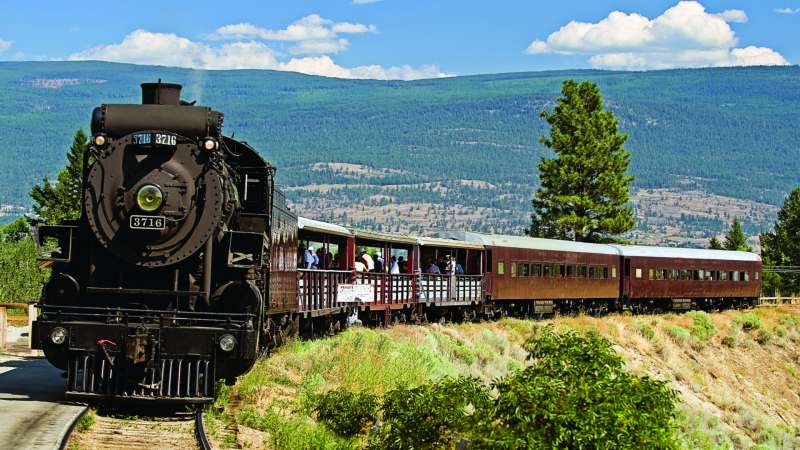