The first drive-in movie theater was opened in the United States in 1915. This innovation marked yet another step in the American entertainment industry. For the first time ever, families could see a movie together without having to get out of their car. Although for a time, drive-in movie theaters were popular all over the United States, with almost a thousand open during their heyday in the 1950s and 60s, the rise of the luxurious multiplex drove most American drive-ins out of business.

Now, there are only a handful that still operate, and exist mostly as nostalgic tourist attractions. Most drive-ins that weren’t turned into multiplexes were abandoned, and still lie empty. If you’re in the mood for some rural exploration, check out a few of these cool abandoned drive-ins.

The Redland Drive-In theater is located just off Highway 59 between Lufkin and Nacogdoches, Texas. Much of the drive-in is now scrap. The only piece that remains is the large screen tower, where you can still see the words “Redland Drive In & Theatre” written in neon lights.

When it was open, admission was only $1 per car, and at first, they did steady business in family-friendly movies. Eventually, as cinemas got more popular, the Redland was forced to show movies that were more risqué in order to attract customers. After it closed for business in the 1980s, it was turned into a scrapyard. Now, the owner is deciding whether or not to tear down the old screen tower to make way for a manufacturing plant. 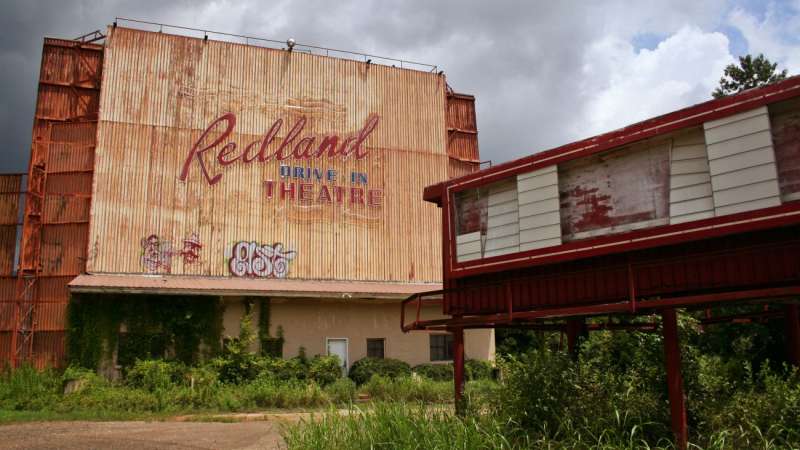 The New Frontier Drive-In is located along a deserted stretch of road just outside of Center, Colorado. Although at one time it had a magnificent neon sign — complete with a lightbulb marquee — with its name and show times displayed on it, the sign has recently vanished, and all that remains is a white clapboard building with green trim, no doubt where concessions and tickets were sold. The opening date of the New Frontier is lost to history, but no doubt it saw lots of customers during the ‘50s and ‘60s.

Located in Titusville, Pennsylvania, the Auto Drive-In is one of just a few drive-in movie theaters that used the name “auto” in their name. It was opened in 1950, just as drive-in theaters were taking off, and played family-friendly movies until the mid-1970s. After that point, it was hard for them to continue making money playing just mainstream Hollywood movies, so they switched to more adult fare. This scheme kept them open until the early 1980s, when declining sales forced them to shut their doors.

If you pass by there today, you can still see the large screen from Route 8, but the grounds are now a lumber yard.