Most Interesting Small Towns to Visit in the United States

If you’re used to living in a city or a big suburb, it can be hard to picture what life is like outside of all the hustle and bustle. In fact, U.S. cities house 62.7 percent of the population (as of 2015), but take up just 3.5 percent of the land area — and those numbers continue to grow as more people move into cities every day.

If you need to get away for a bit, check out some of these incredible American towns. They may be small, but they’ve all got their own unique attributes that make them popular vacation destinations.

Taos is located in northern New Mexico, less than an hour from the Colorado border. It’s a quiet, artsy town that tends to fill up as ski season approaches. It’s also a popular destination in the summer when art festivals fill the galleries of the town.

There are tons of interesting adobe buildings in Taos, including the historic Taos Pueblo which is the historic seat of the Taos (Tiwa) tribe. There are still people living on the Taos Pueblo, practicing the customs of their ancestors. The Pueblo, which is made entirely of adobe, is often open to visitors.

After your visit, you can explore the gorgeous area surrounding the town, including the massive Rio Grande Gorge, and soak in the natural hot springs nestled by the river. 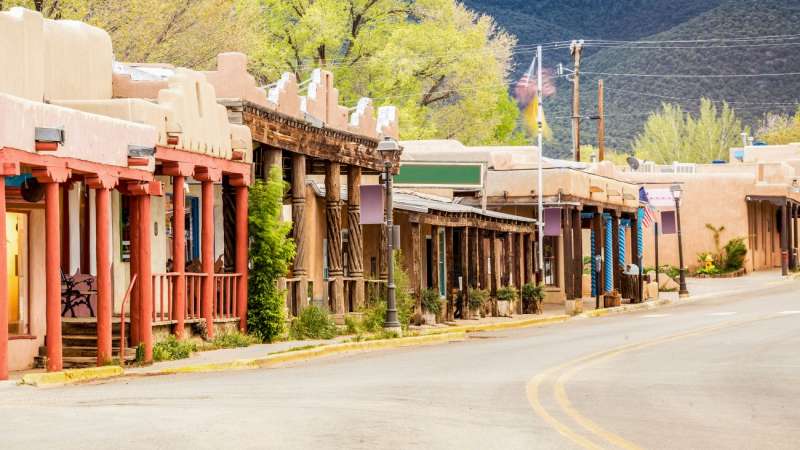 Another beautiful desert town is Sedona, Arizona. There are many people who believe that Sedona sits on a confluence of several spiritually powerful vortexes, which radiate power from the Earth. As such, this town is full of alternative medicine practitioners, as well as people who believe that this power can contribute to their physical or emotional well-being.

Even if you don’t believe in these practices, Sedona is still unutterably beautiful. There are red rock canyons surrounding the town which bathe the entire horizon in glowing light and make great paths for hiking or biking.

While you’re there, make sure to check out the Chapel of the Holy Cross, a massive chapel carved into one of the red rock cliffs. 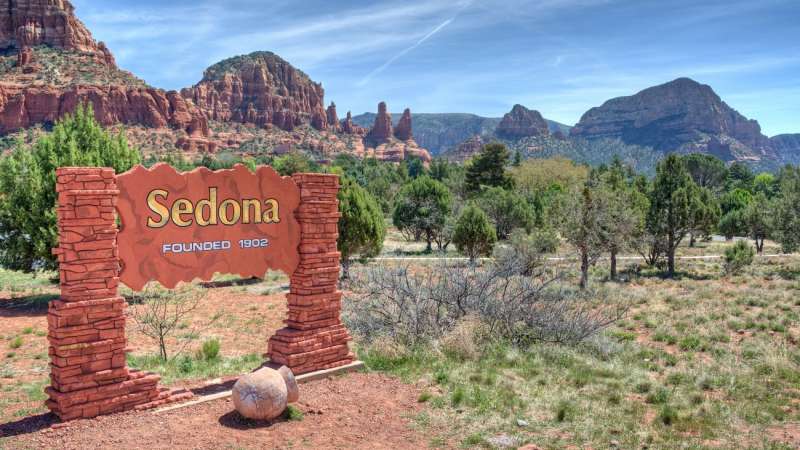 If you’re really looking to get away from it all, the city of Sitka in Alaska rarely receives visitors because it can only be accessed by plane or boat.

Once you’re there, the city is quite small — only 14 miles across — and most of the downtown sights can be accessed on foot. Sitka is popular with outdoor adventurers, who come to scale the nearby (dormant) volcano Mount Edgecumbe, kayak around the islands, and hike the easily accessible trails that crisscross the town.

In addition to all the local natural beauty, Sitka hosts an annual summer music festival and a jazz festival. 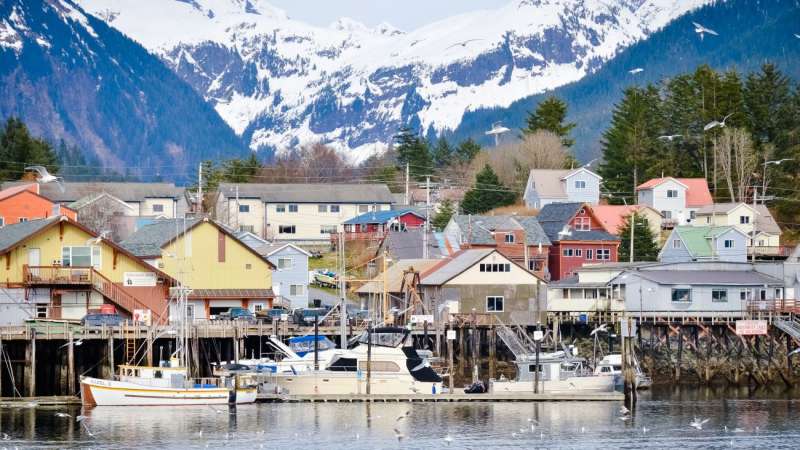 Located on California’s Monterey Peninsula, the town of Carmel-by-the-Sea has always been known as an artist enclave.

Since it was first founded in the early years of the 20th century, it’s been populated by artists, poets, writers, and other bohemian types, who built dreamy cottages clustered together along the bluffs, then gave them names instead of numbers. The town also has no streetlights or parking meters. Carmel-by-the-Sea has historically had a mayor who is connected to the arts in some way, including actor Clint Eastwood, who was mayor from 1986 to 1988.

The nearby Carmel Beach is a gorgeous stretch of white sand, ringed with tall Monterey pines, and is a popular attraction for visitors. 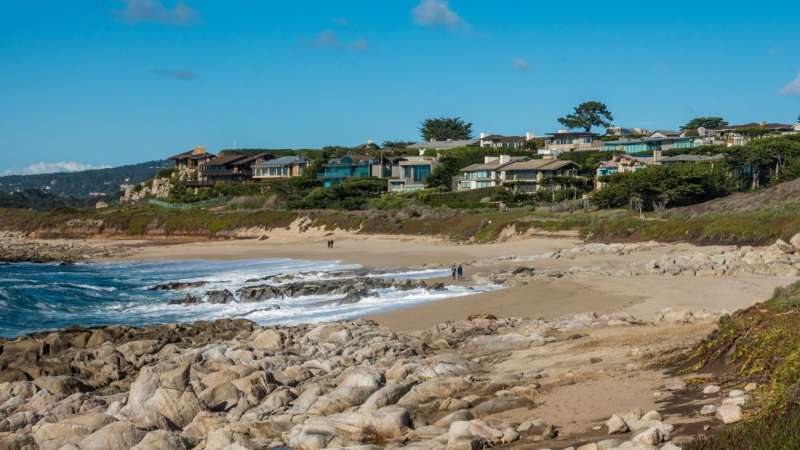 With a population of around 14,000, Beaufort is one of the oldest cities in South Carolina, having first been established in 1711. The town is full of beautiful antebellum mansions, which have made it a popular spot for architecture fans and historians. There are so many of these historic homes in such a small area that the town was actually used as a filming location for Forrest Gump. It’s location on the Beaufort River also makes it a popular destination for boating and other water sports.

Make sure to visit during the annual Home Water Festival, which takes place in July, or the famous Shrimp Festival held every October. 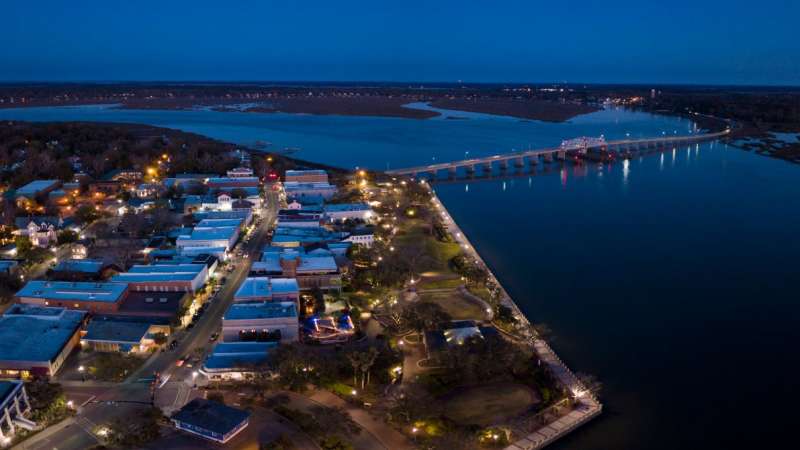 There aren’t many places in the United States that are as rich in mineral springs as Hot Springs, Arkansas. This town has been a haven for relaxation for centuries and has attracted visitors from all over the world who come to soak in the rich thermal waters.

As such, there are tons of spas all over town, but the most famous are located on Bathhouse Row. The eight spa buildings located on this road were all built before the federal government established the Hot Springs National Park.

Make sure to enjoy the waters at one of these historic spas, then check out some other local attractions like the Gangster Museum of America or the Belle of Hot Springs riverboat tour. 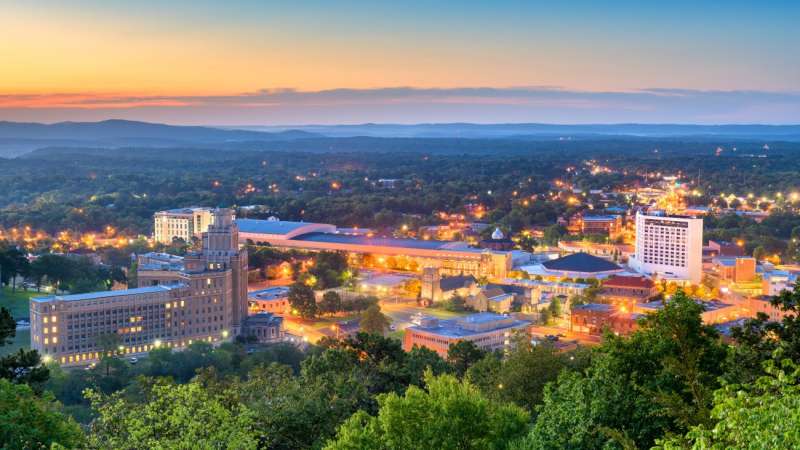 If you’ve ever fantasized about a New England vacation, you were probably thinking about Nantucket. It’s a beautiful New England seaport town dating back to 1641 when the first settlers from Europe arrived. Nantucket represents the pinnacle of New England society. To demonstrate, the average price for a single-family home was $3.2 million in 2018.

In the summer, tourists flock to the town to experience life as one of the elites — if only for a few days. Make sure to check out the notable lighthouses of the area and wander along the 82 miles of the open public beach before tucking into some fresh seafood, undeniably the town’s chief delicacy. 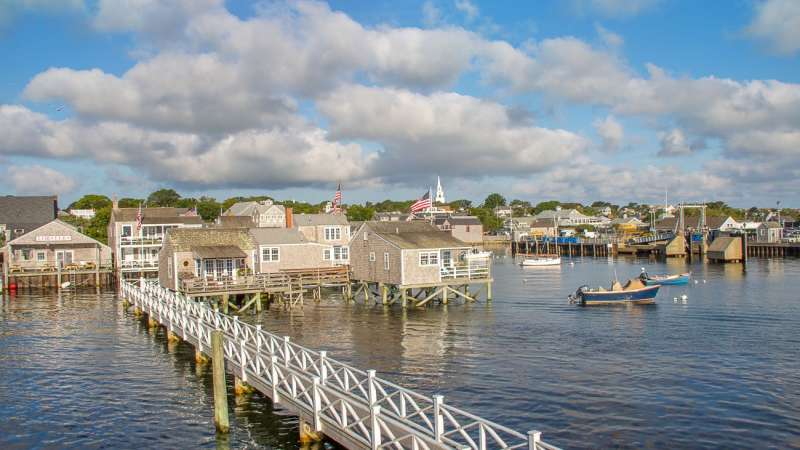 Fans of historic covered bridges will already be familiar with Winterset, Iowa, a tiny town with six covered bridges. This town is the inspiration for the movie The Bridges of Madison County, so it regularly attracts fans. Despite that, it’s beautiful in its own right. The Covered Bridge Festival takes place every October, which is a great time to visit.

While you’re there, make sure to check out the views from the top of the Clark Tower. 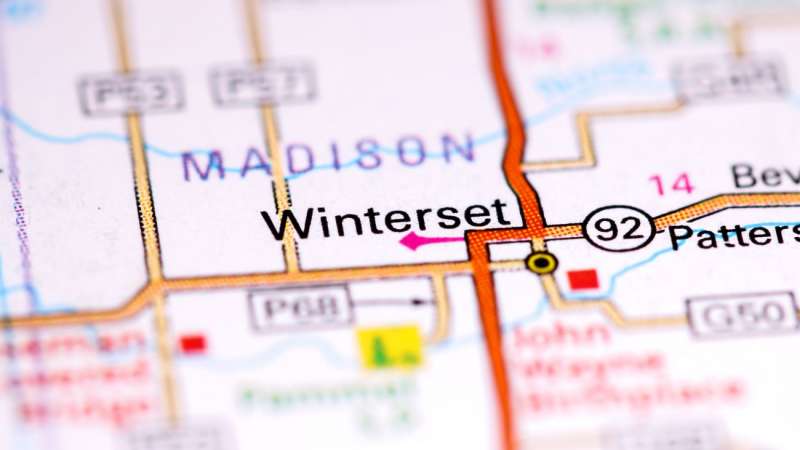 Leavenworth, Washington looks like it was plucked straight out of the Alps and dropped into the Pacific Northwest.

Although it was established in the early 1900s, it stagnated until a group of businessmen got together and came up with the idea to start constructing Bavarian-style buildings and residences to attract both residents and tourists. The idea took off and now Leavenworth is known as one of the most popular holiday towns in the United States. It also attracts a ton of visitors for the annual Oktoberfest celebrations. 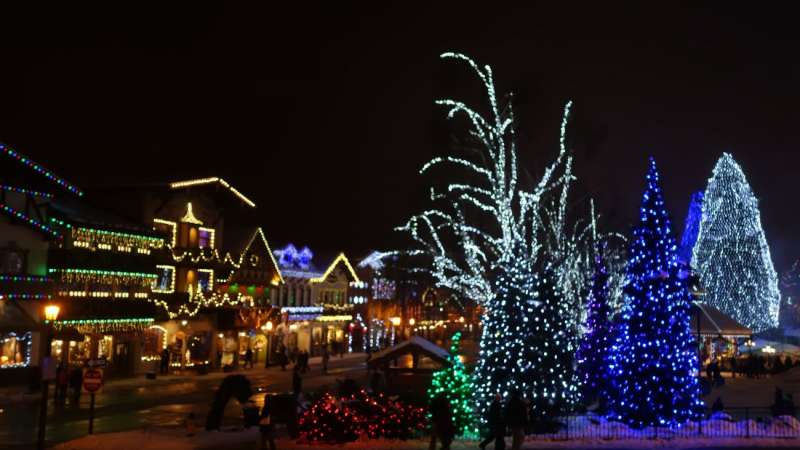 Advertising itself as the Apple Capital of Georgia, Ellijay is always packed with visitors in the fall, who come for the annual Apple Pickin’ Jubilee. In October, Ellijay is painted with gorgeous colors as the leaves turn and visitors flock into town for the Apple Festival. Even when that’s over, there are lots of weekly events in the historic town square, like farmer’s markets, antique sales, and vintage car shows.

When you’re not exploring the adorable town center, you can hike the trails within the nearby Chattahoochee-Oconee National Forest. 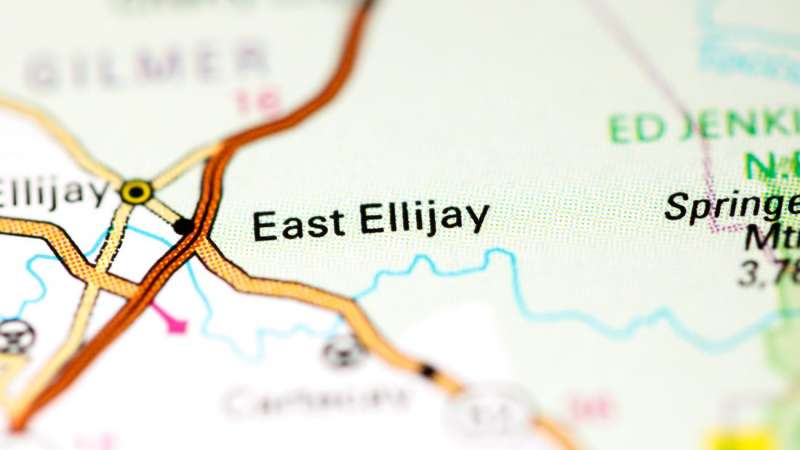 When you’re in Hawaii, it’s hard to escape the hordes of tourists who descend in the winter, anxious to escape the cold that envelops the continental United States. Instead of traveling to a larger city like Waikiki or Honolulu, this year set your sights on a smaller town, like Hanalei.

Located on the island of Hawai’i along Hanalei Bay, it’s a quiet community filled with beautiful scenery and interesting architecture, including the unique Waioli Huiia Church. After a day of swimming or surfing, grab a bowl of organic shave ice from Wishing Well Shave Ice, peruse some of the awesome boutiques in the town center, then end your day with a snack from one of the town’s many food trucks. 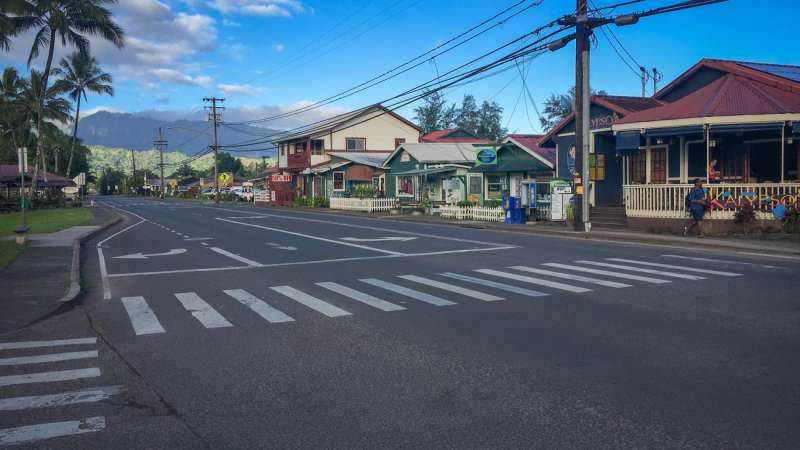 A historical plantation town, St. Francisville is one of Louisiana’s most architecturally significant areas, with six local historic homes regularly open for visitors. Most people start at the West Feliciana Historical Society Museum (which is housed in a late 19th-century hardware store) before moving on to the home tours. There are several unique churches in the area, as well as the Cat Island National Wildlife Refuge, which is popular for birding, hiking, and other outdoor pursuits. 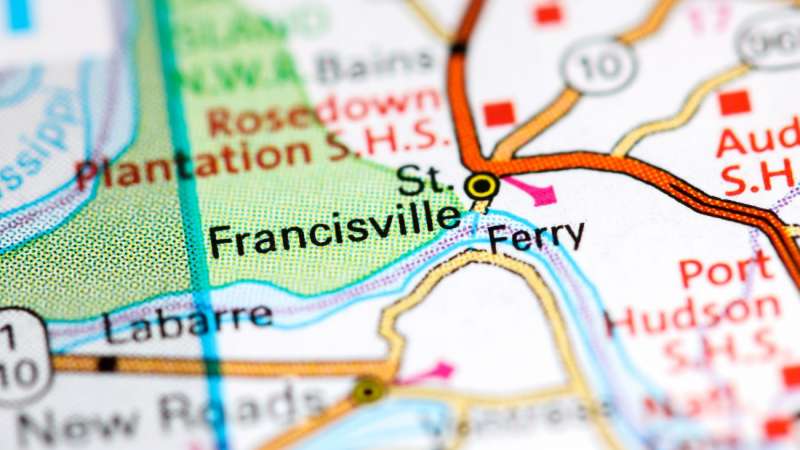