You can live in New York City for your entire life and still not see everything the city has to offer.

New York City is the most populous city in the United States and has a reputation as the most vibrant and thrilling vacation destination on the continent. It’s the home of New York Fashion Week, the United Nations, Broadway, Wall Street, and the Statue of Liberty.

Its fast pace inspired the phrase “New York minute” and even if you only have $5 per day to spend, you can still enjoy every aspect of this incredible metropolis.

New York City was originally populated by the Lenape people, Algonquin hunter-gatherers who made their home in the area between the Hudson and Delaware rivers.

In 1624, Dutch colonists arrived and dubbed the area “New Amsterdam.” The island of Manhattan was originally purchased from the Lenape people in exchange for trade goods like cloth and farming equipment. Since the 1760s, it has been one of the largest cities in the Western hemisphere.

There’s so much history in New York that it’s hard to summarize exactly when each new group arrived. The five boroughs of New York are home to people who hail from hundreds of different ethnic groups and speak as many as 800 separate languages. The 2000 census found that the students of the New York Public School system alone speak more than 176 languages.

The city’s diversity has had a huge effect on its population and is one of the reasons why it remains so popular with visitors. There are individual areas — such as Chinatown, Little Italy, and Little India — that have almost become cities unto themselves. In addition to these huge areas, there are neighborhoods which have become enclaves for dozens of different ethnicities, including Little Guyana in Queens, Little Odessa in Brighton Beach, and Little Australia in Nolita.

New York City’s diversity has had a huge effect on its culinary landscape. Many international restauranteurs and chefs consider New York City to be an essential first step in their global expansion efforts. For instance, Daniel Boulud arrived from France in the 1980s. He quickly became a megastar of the NYC dining scene, opening seven restaurants in Manhattan alone. Also, Masaharu Morimoto, who many people know from Iron Chef, opened his eponymous restaurant Morimoto in the early 2000s.

If you’re interested in fine dining, there are endless lists of restaurants in NYC that will deliver an unforgettable experience. Le Bernardin, Daniel, Eleven Madison Park, and Gramercy Tavern are all renowned for their incredible artistry, but dinner will start at $150 per person and only go upwards from there.

One of the greatest joys of New York City is the 99¢ pizza that can be found throughout Midtown. The name of the shop doesn’t matter — just look for the bright sign advertising 99¢ slices. If you’re willing to pay $3.49 more, you can get a slice that’s a thousand times better from Prince Street Pizza in Nolita.

Another iconic New York experience is the hot dog duo from Papaya King, which come topped with sauerkraut, relish, or red onion sauce. Papaya King, which has been an NYC institution since 1923, offers cheap hot dogs that are better than anything found in a Sabrett wagon, as well as delicious tropical juices.

Whether you head to Chinatown for hand-pulled noodles, grab a jaw-crackingly-huge pastrami sandwich from Katz’s, or a gobble down a hot cheese arepa at the food truck turned brick-and-mortar Arepa Lady, it’s almost impossible to make a bad food choice in NYC. Unless you go to any of the restaurants in Times Square. Don’t do that.

The New York bar scene is almost as diverse as their culinary scene. There are over 10,000 licensed bars in the city, so whether your taste tends towards upscale cocktails in a swanky atmosphere or beers in a dive bar, there are plenty of interesting options.

If you’re interested in history, some of the oldest bars in the country are located in New York City, including the 1762 Fraunces Tavern, whose past clientele includes George Washington. It changed its name to the Porterhouse Brewing Company after it was bought out, but the building is the same. McSorley’s Old Ale House is the oldest continuously operating bar in the city, having been in the same East Village spot since 1854. Past patrons include Abraham Lincoln and John Lennon.

If cocktails are more your scene, some of the city’s best cocktail bars include Death & Co in East Village and the Financial District’s The Dead Rabbit, a “21st-century Irish pub” which has been voted the best bar in the world two years running.

New York State has been a hub for craft breweries. As such, there are plenty of places in NYC to sample some of the best brews the state (and country) has to offer. Harlem Hops, in Harlem, has 16 rotating taps that focus on local beers made specifically by brewers of color. Covenhoven, in Crown Heights, also has 16 draft lines, as well as a gigantic fridge filled with more than 100 bottles of beer and cider.

If a unique atmosphere is what you’re looking for, NYC is a haven for speakeasies and other watering holes that are secretive havens for those who enjoy a challenge. PDT, which stands for Please Don’t Tell, can only be entered through a phone booth located in an East Village hot dog restaurant. Some people also consider the Staten Island Ferry to be a not-so-secret speakeasy. The concession stand on the ferry sells beer, so you can relax and enjoy a free ride while looking out over the incredible views of the harbor and the Statue of Liberty.

New York City has so many hotels, to the extent that the real estate market has become the fourth most expensive in the United States.

If you’re dead set on staying on the island of Manhattan, areas like Harlem or even Washington Heights offer much cheaper rates. Areas in Brooklyn are becoming just as expensive as Manhattan, but many people prefer it because it’s less congested.

Sites like Hotwire, where you can book hotel rooms without committing to a specific location, and Airbnb make booking accommodations a little easier.

There are so many tourist attractions in New York City that it’s difficult to decide where to go first.

Times Square is iconic, but you’ll get the idea after a few minutes in the crowd. Seeing a Broadway show is an incredible experience, but unless you’re really set on a specific show, don’t buy your tickets in advance. There are discount ticket booths called TKTS that operate all over the city and offer discounted tickets to many popular Broadway shows.

New York City has a ton of different sports teams, so seeing a game at Yankee Stadium, Madison Square Garden, or Citi Field is a really fun outing. Scalpers usually sell tickets outside the venue or you can look online for discounted seats the day of a game.

Central Park is often called the lung of the city. It spans 3.5 square miles between 59th and 110th Streets. There’s a zoo, a theater, 26 sculptures, and a lake inside the park.

For many people, a visit to NYC isn’t complete without visiting some of the city’s most famous buildings. The Empire State Building, Trinity Church, Rockefeller Center, One World Trade Center, and the Chrysler Building are just some of the city’s most impressive tourist attractions. There’s an entire museum district and more galleries than you could ever visit in a lifetime. 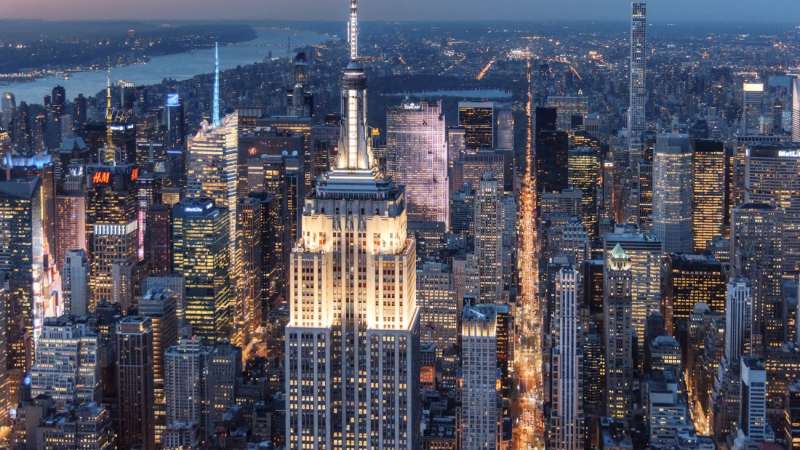