Depending on where you live or where your family comes from, these recipes will vary. If you come from a multi-ethnic family, you may have to make several different treats in order to accommodate everyone.

If you’re interested in expanding your repertoire this holiday season, check out this list for some of the most popular holiday treats that are traditional around the world.

Tourtière is a French-Canadian treat. In fact, it’s one of the few holiday baked goods to make it into the main course of the holiday meal.

Tourtière is a meat pie made with minced meat — a mixture of pork, veal, and beef are all common — or pieces of wild game. The filling often depends on what’s available in your region. The filling is tucked into a deep-dish pie crust and covered with a pastry top.

Although this dish originated in central Quebec, it’s been spread all over the country by immigrants and travelers. As such, it has even been known to feature a sturdy fish like salmon when baked near the coastal regions.

Stollen is one of many traditional holiday recipes to use dried fruit. It is a yeasted fruitcake with filling similar to the English version, but with a risen dough, which gives it an aerated, bread-like texture.

Included within the stollen are large ropes of marzipan. They are placed in the center of the dough and melt slightly in the oven, infusing the rest of the loaf with delicious almond flavor.

Chefs can choose which dried fruits to use. Some typical choices are raisins, currants, and even chopped dried apricots. The dried fruits are often soaked in rum or juice before they’re stirred into the dough mixture.

Another yeasted bread that’s often enjoyed during the holidays is panettone, an Italian delicacy. Originally baked in Milan in the early 20th century, this bread became a hit with local families and quickly spread around the country.

Panettone has all the rich flavors that are typically associated with holiday baking, like spices, candied peel, raisins, and plenty of citrus zest. Also, the loaf is light. It rises three times to get its characteristic loft.

Typically, panettone is enjoyed during the holiday season with a glass of espresso or a sweet dessert wine like Moscato d’Asti or vin santo. It can also be served alongside a dish of zabaione or rich mascarpone cream.

Fruitcake can be an extremely divisive issue between family members at Christmas. Older generations refuse to celebrate the holidays without it since they’ve grown up on this rich, dense, decadent treat. Many people from the younger generation don’t appreciate the complex flavors of rum-soaked fruits bonded together with marzipan or royal icing.

There are tons of different types of fruitcakes around the world. However, the British version, which is often decorated with white royal icing and miniatures snow scenes made with gum paste or reusable figurines, is the most easily identifiable.

Typically, the fruitcakes are “fed” with liquor like brandy or rum for weeks before they’re wrapped in stiff icing and served.

The bûche de Noël is a long-standing French tradition that has spread around the world through colonization.

Bûche de Noël translates into English as “Yule Log”. As such, it’s a long, log-shaped cake made of genoise sponge rolled around a sweet buttercream or ganache filling. It’s often iced with more icing or chocolate coating to resemble the outside of a fireplace log, then topped with festive decorations.

Although it seems like a lot of work for a home chef, it’s not that hard to make. Even if your log cracks through the middle, it will still taste delicious.

It isn’t just Christmas that has its own collection of holiday recipes. The Jewish holiday of Hanukkah is a festival of lights that occurs over eight days between November and December.

Rich dishes are preferred. As such, dishes cooked in oil like potato latkes are traditional.

Although all sorts of desserts are prepared for Hanukkah, the most popular by far are sufganiyot. It is a rich deep-fried dough balls filled with jam or custard.

In Israel, you can smell bakeries frying up huge batches of sufganiyot during Hanukkah. Although it’s cheap to make, many bakeries are upping their game by making versions with unique fillings like dulce de leche and tropical fruit pastes.

Another popular deep-fried treat that’s enjoyed around the holidays is fritule. It is a tiny pastry snack often enjoyed in Croatia.

There’s not much that differentiates them from regular doughnuts, except the inclusion of ingredients like rum and sometimes raisins. They’re fried up in large batches, then served with a dusting of powdered sugar on top.

It’s rumored that these treats are the inspiration for the Louisiana beignet. The Louisiana beignet was first made famous by a family of Croatian immigrants who opened a coffee stand in the city’s French market more than 100 years ago.

In Norway, one of the most beloved holiday cookies is called krumkake.

These delicate little cookies are made on a special iron. This iron churns out one thin cookie at a time, which are then rolled around a form to make a cone. The cones — that are all etched with decorations created on the inside of the iron — are then left to cool and filled with whipped cream or a traditional Norwegian cloudberry cream called multekrem.

The krumkaker are served as part of a typical Norwegian dessert spread after a rich holiday dinner, alongside other traditional sweets like rosettes and sandbakelse.

It isn’t just Europe that has a rich tradition of sweet holiday cookies. Alfajores are common all-over South America and the Philippines. In fact, anywhere that was exposed to Spanish settlers.

The original Spanish cookie was made with honey, breadcrumbs, spices, and nuts. However, the version that’s more popular in South America is a much simpler confection that features two sugar cookies sandwiching a smear of rich dulce de leche. They’re often decorated with powdered sugar and feature edges that are rolled in grated coconut.

Hungarian beigli are made of a mesmerizing mixture of filling swirled into delicious crust made with both yeast and lard. To ensure a rich dough, full-fat sour cream is added to the already generous amount of lard. This makes the crust easier to roll around the filling.

There are two versions of the beigli: ground walnuts and ground poppy seeds. The filling is cooked with milk until it makes a dense paste, which is spread over a rectangle of dough and rolled up.

The beigli are served thinly sliced. It’s common for people to take a slice of each beigli, so they get a taste of each filling.

Julpepperkakor (Christmas ginger snaps) are delicious cookies made for Swedish Christmas celebrations. Although pepperkakor is often baked throughout the year, they’re cut into fun shapes like hearts, stars, and pigs — which symbolize different virtues — at Christmas.

It’s thought that by eating heart-shaped pepperkakor, people will become kind and gentle. This could be because potash was originally used as a leavening agent instead of baking soda, which helped soothe upset stomachs.

Belgian cougnou are miniature loaves of leavened bread whose shape is said to suggest the baby Jesus. The loaves are decorated with slashes that look like baby swaddling and made as tiny as possible. They’re often given to children as a treat on both Christmas Day and St. Martin’s Day, a religious holiday that takes place every year on November 11.

Like many yeasted holiday bread, cougnou are studded with raisins. Sometimes, they feature an edible miniature figurine of the baby Jesus in the center. Plus, they’re typically enjoyed with a steaming mug of hot chocolate. 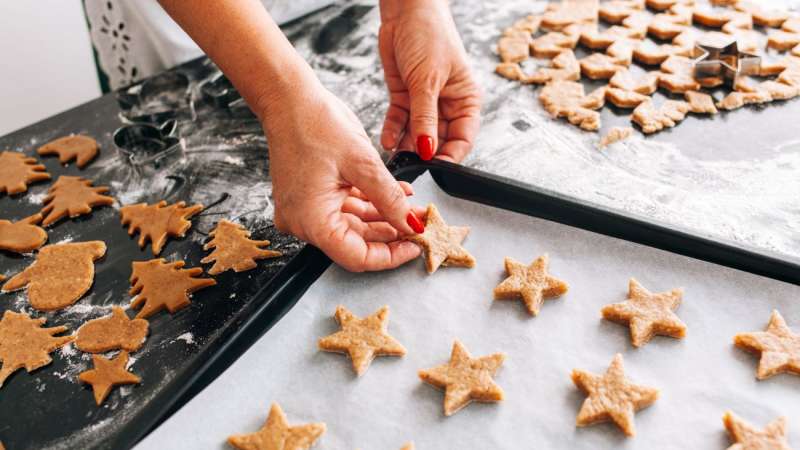