The cuisine of Puerto Rico uses many of the same ingredients as other Caribbean and Latin American cuisines. Despite that, it managed to carve out its own special place in the global food scene. Due to the island’s unique location and history, their food has been influenced by the delicacies and traditions of the indigenous Taino people, along with European and African flavors and techniques.

Although there are many Puerto Rican restaurants in the United States, most of the authentic ingredients for these key dishes can only be found on the island. So, keep a lookout for these traditional dishes on your next visit.

Luquillo kiosks serving delicious fried treats and seafood can be found on street corners and beach-side boardwalks all over Puerto Rico. They’re an extremely popular place to stop for a snack on the go.

One of the most beloved food offerings from these kiosks is empanadillas. Empanadillas are small fried empanadas (turnovers) stuffed with a variety of fillings. The dough is similar to a pie crust.

These treats are the perfect handheld snack to stave off pre-meal hunger.

Another popular Luquillo kiosk staple is the alcapurrias. It’s a fritter made from masa and plantain wrapped around a cigar-shaped helping of picadillo, a common base of many Puerto Rican dishes.

Although picadillo is a common ingredient, it’s common for vendors to put their own spin on the dish. As such, they like to include fillings like corned beef or shrimp. You can also find alcapurrias made with cassava dough, which are commonly stuffed with crab meat.

Many Puerto Rican families devote a whole weekend before Christmas to whipping up huge batches of pasteles. Since the most basic pasteles are complex to put together, they’re often made during large family gatherings like Christmas.

Each pastel is made with a wet masa-based dough that includes mashed plaintain, eddoe, potato, and calabazas. This dough is wrapped around a serving of meat. Then, the entire mixture is tied up in a banana leaf and boiled before serving. The final dish looks a bit like a tamale, although it tastes completely different.

Pasteles are one of Puerto Rico’s national dishes. There’s even an annual festival — the Festival Nacional del Pastel Puertorriqueño — held on the island every year.

One of Puerto Rico’s most popular dishes is arroz con gandules, rice and pigeon peas cooked with pork and sofrito. While there are a lot of ingredients in this dish, it doesn’t take too long to cook once everything is assembled. It often includes cilantro, onion, garlic, herbs, and a variety of peppers.

It wouldn’t be a Puerto Rican Christmas celebration without generous helping of pernil, a slow-roasted pork shoulder. It’s most traditional to serve pernil with arroz con gandules.

Preparations for pernil start the day before serving. The pork marinates for a full day before being scored so the cooked sofrito and spices can be stuffed into the slashes. The pernil is then roasted for hours over low heat until the meat is fall-off-the-bone tender.

In the last 15 minutes or so, the heat is raised so the skin can crisp. The crisp, well-seasoned skin is called cueritos. Cueritos is considered one of the best parts of the dish. If there’s any left over, it makes a delicious Cuban sandwich the next day.

According to the New York Times, one of the most popular dishes that Puerto Rican athletes who move away from home crave is mofongo. Although mofongo has its roots in African cuisine, it makes use of ingredients that are indigenous to Puerto Rico.

This dish is made with freshly fried green plantains mashed until dense and sticky. It’s then mixed with spices and either chicharron or bacon. The rich mofongo is piled on a plate and covered in stew or broth. Some types of mofongo are served plain. Others have rich caches of meat or seafood on the inside of the plantain mound.

In Puerto Rico, turkey stuffed with mofongo has become a traditional Thanksgiving favorite.

If you want to indulge in a Puerto Rican meal but don’t want to go to the trouble of cooking mofongo or pasteles, simple pollo guisado is a great choice.

Pollo guisado is an easy braised chicken stew considered by many to be a weeknight staple. It uses basic chicken parts and broth. The stew is flavored with annatto — which gives it a bright yellow hue — sofrito, adobo seasoning, and olives. It cooks quickly in one pot, giving you a flavorful and easy meal in less than an hour.

Although the stew can be made with a variety of proteins, it always contains the signature ingredients of corn on the cob, tubers, guineos, and sofrito. Typical variations of sancochos include chicken and smoked ham, pork feet, or short ribs and chorizo. As long as it contains both tubers and meat, it’s a sancocho.

To sop up the flavorful liquid, sancocho is often served with rice, bread, or tostones.

Serenata de Bacalao is a Puerto Rican dish that’s often eaten during the Easter holidays. Many of Puerto Rico’s traditional Easter week meals are light, which is intended to direct the mind towards more spiritual matters.

Serenata de Bacalao is made from salted cod that’s rehydrated and mixed with sliced hard-boiled eggs, onions, and a variety of vegetables and tubers. The entire dish is then gently tossed in an oil and vinegar dressing.

Although Tres Leches cake is popular across the Caribbean and Latin America, bakers in Puerto Rico take it to the next level. Instead of just using heavy cream, sweetened condensed milk, and evaporated milk, Puerto Ricans add cream of coconut, mango milk, and rum. The mango and rum give it an irresistibly tropical taste. Plus, they add more flavor than milk alone provides.

This is a definitely not a cake you should be making if you’re counting calories.

While everyone else in North America drinks eggnog on Christmas, Puerto Ricans indulge in coquito. This is a delicious cold drink made with sweetened condensed milk and coconut cream, spiked with rum. It’s heated on the stovetop to bring all the different ingredients together, then chilled for several hours prior to serving.

Many companies are trying to capitalize on coquito’s rising popularity by selling their own bottled versions. However, nothing beats homemade.

Coquito is often served in small glasses as it’s quite rich. 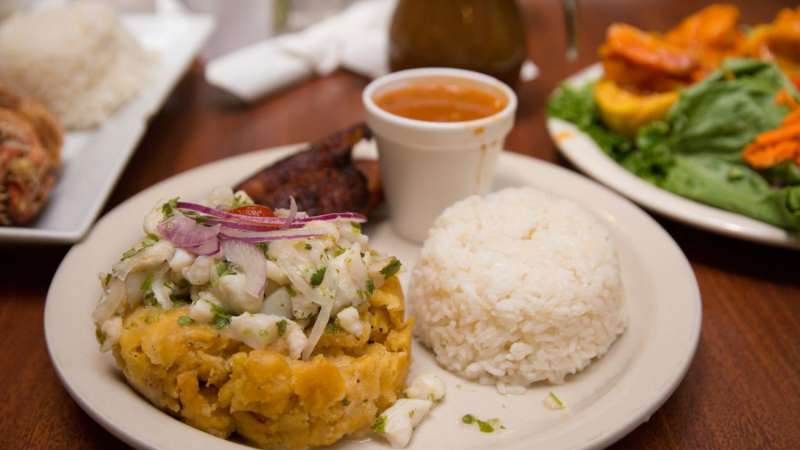