Unlike some cuisines that have developed in a vacuum over the course of several hundred years, Jamaican cuisine has been influenced by a huge variety of factors. The foods of the indigenous islanders and African, Indian, Spanish, and Chinese immigrants and travelers have melded into a delightful cuisine that features a variety of meats, fish, tropical fruits, and spices.

If you’ve never had Jamaican food before, get ready for a flavorful explosion as soon as you take your first bite. Here are some of the best dishes from a cuisine full of spice, flavor, and heat.

On a Saturday afternoon in Jamaica, it’s a common sight to see most household cooks throwing together a steaming vat of red peas soup. This is a long-simmered soup that’s based on either red kidney beans or gungo peas.

Salted pig’s tails are the secret behind this soup’s rich, meaty flavor. If they’re unavailable, some cooks choose to use ham hocks instead. Vegetables like yellow yam or sweet potato, onion, and carrot are common additions. However, each family has their own recipe.

The entire soup is simmered until it’s thick. Then, dumplings are dropped in before serving, so they can steam in the rich broth.

If you’ve ever had rice and beans, you might think that this dish is unbearably bland and flavorless. However, that’s just an indication that you’ve never had real Jamaican rice and peas.

This dish is made with red kidney beans — called peas in Jamaica — that are boiled until tender. Once tender, the peas are cooked in coconut milk with rice and herbs. The coconut milk makes both the rice and peas toothsome and flavorful. Plus, the addition of spices like green scotch bonnet pepper, thyme, and allspice add a deep flavor profile that’s typical of Jamaican food.

This side dish is most often found on the table for Sunday dinner.

Jamaican patties are found all over the world. In fact, they’ve become an indispensable grab-and-go item that delivers big flavor on a small budget.

The pastry shell is made with either turmeric or egg yolks, which give them their characteristic yellow-orange color. Inside, you’ll find fillings like ground beef, chicken, or sautéed callaloo flavored with allspice, hot peppers, and paprika.

It’s common to eat these patties sandwiched inside coco bread, a rich, starchy bun made with coconut milk.

Bammy is a cassava flatbread that has been eaten in Jamaica since the Arawaks — the indigenous people of Jamaica — were the island’s only inhabitants.

Bammy is made with cassava flour, which was cheaper and more plentifully available than wheat flour until the 1940s. It fell out of popularity for a time, as Jamaicans turned to imported wheat flour to bake their bread. However, it has been making a resurgence since the 1990s.

When bammy is made at home, the cassava is cooked on a griddle into a circular flatbread similar to a tortilla. Commercial bakeries bake it into thicker discs which are cut into triangles for serving.

Although there are many popular dishes in Jamaican cuisine, none is more representative of the island’s culinary heritage than ackee and saltfish. In fact, it’s even considered Jamaica’s national dish.

To make ackee and saltfish, cooks start with ackee fruit. The fruits must be washed multiple times in order to remove the parts of the fruit that are poisonous. Once the flesh has been separated from the seeds and pit, it’s boiled until soft. Once soft, it’s mixed with red peppers, tomato, scotch bonnet pepper, and saltfish — which has been soaked in water, boiled, and flaked.

The dish is often served for breakfast on weekends alongside dumplings, breadfruit, yellow yam, or plantain.

Jerk cooking is thought to have originated with either escaped slaves who were forced to hide out in the forest to avoid being captured by the British, or native Amerindians from other islands in the Caribbean.

The word “jerk” refers to the method of cooking and the flavors that are used to marinate and spice different cuts of meat. There are a huge variety of spices in jerk seasoning. However, the mixture is built on two major flavors: scotch bonnet peppers and allspice. Anything can be cooked in this style. While chicken and pork are the most popular, jerk shrimp, lamb, and fish are not uncommon.

One dish that exemplifies the influence that Indian techniques and flavors have had on Jamaican cuisine is curry goat. It’s an extremely popular dish to serve at family functions and parties. It’s often presided over by a local expert who makes a living cooking large portions of curried meat for a crowd.

Curry goat includes a huge variety of spices. Among these spices are curry, allspice, and scotch bonnet peppers. To ensure the spices penetrate deeply into the meat, it’s marinated for several hours or even overnight. The dish starts with spices are “burned” in oil until they change color. Then, the meat is added and simmered until fork tender.

These delicious chunks of meat are served with roti, fried plantain, or rice.

In Jamaica, stewed oxtails are a popular restaurant dish. This is because their long cooking time makes them more complex to cook at home.

Oxtails need to be blanched, dredged with flour, and browned until the meat is crisped all over. Then, they’re simmered with bacon and aromatics until tender, which usually takes about four hours. At the end of cooking, butter beans are added to bulk up the sauce.

Oxtails are often served with rice and peas.

If you want to see how Spanish cuisine influenced Jamaica’s culinary heritage, look no further than escoveitch fish. This is a dish that uses the same techniques as Spanish escabeche with uniquely Jamaican flavors.

Escoveitch fish uses any fried, firm-bodied fish like mullet, kingfish, or red snapper. Cooks marinate it in an acidic mixture of vinegar, garlic, onions, scotch bonnet peppers, and allspice berries. The result is a flavorful yet light dish that’s often served for breakfast.

Escoveitch fish is a popular dish during Lent when meat is forbidden.

Another popular fish dish that makes use of some of Jamaica’s ocean bounty is Stamp and Go. These are fried fritters made with saltfish and served with a variety of flavorful dipping sauces.

Stamp and Go is an extremely easy dish to make. Therefore, it’s often served as a quick, on-the-go breakfast or as a party appetizer. However, just because they’re easy to make doesn’t mean they lack flavor. The fritters are made with shredded saltfish and flavored with classic Jamaican spices like paprika and scotch bonnet pepper.

Bulla cake is a rich, dense confection made with molasses, ginger, and spices. Although it’s a popular treat for school children, people of all ages enjoy this cake because of its amazing flavor.

Bulla cake is relatively simple to make. Nutmeg, ginger, and vanilla are stirred into a thick dough made with brown sugar, margarine, flour, and water. Once blended, it’s rolled and sliced before being baked.

Bulla cake can be eaten on its own or with sliced cheese, avocado, or butter.

Another popular Jamaican sweet treat is gizzada. Also called pinch-me-round, this tart has a syrupy coconut filling spiced with nutmeg. Plus, it is served in a crisp pastry shell.

Many think that the technique for making gizzada was brought to the island by Portuguese settlers.

Sorrel is a sweet, tart drink made by simmering hibiscus flowers in water. The result is a flavorful beverage that’s bright red in color and rich in vitamin C.

While you can drink sorrel plain, it’s often spiced with ginger and allspice berries. For holidays and celebrations, wine or rum is added to sorrel to make a sweet and spicy mixed drink.

This interesting drink contains several ingredients that don’t appear to go together. Regardless, many men drink this unique concoction anyway because it’s thought to enhance male virility. 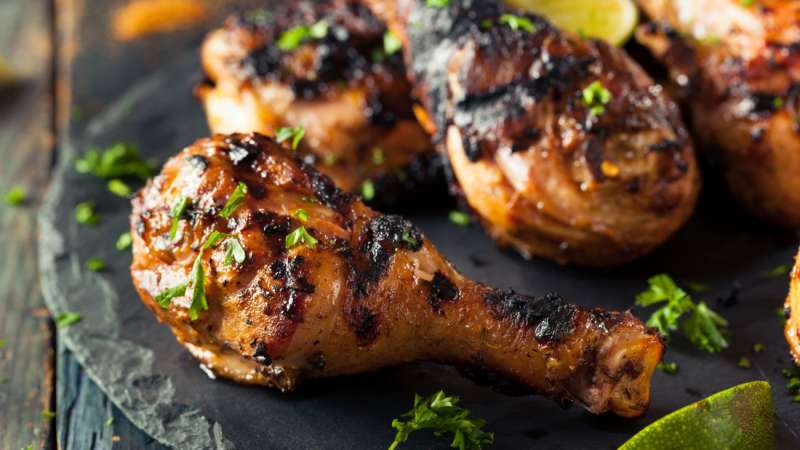