If you’re a fast-food connoisseur, chances are you’re already familiar with the McDonald’s menu that’s typical in North America. They bring in new choices fairly frequently. However, most people stick with their usual order of Big Macs, Quarter Pounders, fries, McFlurries, and Apple Pies. It’s familiar food, and the bulk of the menu is essentially the same things that the McDonald brothers started serving when they opened their first restaurant in 1940.

During the decades since, the company has spread around the world. In fact, it operates more than 36,000 franchises globally. In an effort to appeal to different markets, the company has diversified its offerings. As such, McDonald’s now offers customized menu items that are unique to each country.

Here are some of the most unusual McDonald’s menu items from around the world.

One of the most popular limited-time menu items in Japan is the Gratin Croquette Burger. It’s a steaming patty of fried crab and macaroni noodles enrobed in a creamy gratin sauce, which is then breaded and deep-fried. The buns that are used for this burger are steamed, rather than toasted. This emphasizes the crunch of the patty and the shredded lettuce on top.

The Gratin Croquette Burger is a winter menu item, which is probably a good thing. The combination of deep-fried cheese, crab, and macaroni might be too much in the steamy summer months.

The Canadian province of Quebec’s most popular dish is poutine. Poutine is a delicious main dish or side made of fries layered with meaty gravy and squeaky cheese curds.

It’s inspired a cult following across Canada and into the United States, where it’s starting to replace dishes like chili cheese fries. Of course, McDonald’s had to get in on the game with their own.

Props to McDonald’s for actually using real cheese curds. It makes the dish both delicious and authentic.

For those who are looking for more veggies in their diet but don’t want to go so far as to actually eat a salad, these McNuggets are for you. Made with sautéed spinach and Parmesan cheese, these McNuggets were a limited time offer at McDonald’s in Italy.

Although the promo photos make them look appetizing, it’s probably difficult to taste anything in there other than the cheese.

In order to cater to national tastes and compete with the nation’s most beloved food chain Jollibee, McDonald’s Philippines rolled out their Chicken McDo with Spaghetti. Based on Jollibee’s popular Crispy Chicken and Jolly Spaghetti, the McDonald’s meal is made of a fried chicken leg with dipping sauce alongside a small portion of spaghetti noodles with sweet tomato sauce, Filipino style.

This dish is one of the most popular fast-food combinations in the country. Moreover, McDonald’s actually gets it right. Most people report that it tastes pretty delicious.

McDonald’s Cheese Stars were a limited-time promotion. However, they were so popular across many of the Balkan McDonald’s that they’ve brought them back year after year.

Made with two types of cheese covered in a crispy coating, they’re then deep-fried until the cheese inside is runny, hot, and delicious. Similar to a mozzarella stick, the Cheese Stars are served with a small container of sour cream for dipping.

One of the most unusual and delicious-sounding items sold by an overseas McDonald’s is the McCurry Pan. It’s a delicious veggie curry made with mushrooms, peppers, corn, and broccoli in a spicy, creamy sauce that’s tucked into a large pastry bowl.

To eat it, spoon the curry out of the bowl, then deconstruct the bowl itself and use it to mop up the remaining sauce. Although it contains a healthy number of colorful veggies, the curry sauce is loaded with fat.

Another international McDonald’s treat that contains plenty of veggies but still isn’t the healthiest thing in the world is the McNoodles. This limited-time dish was offered to customers in Austria in an effort to test it out for potential roll-out around the world.

Essentially, McNoodles was a stir-fried bowl of noodles, which came in two different flavors: chicken curry and sweet and sour chicken. The dish is no longer available, which shows that it likely wasn’t the breakout hit they McDonald’s for.

A nürnberger is a German bratwurst originally made in Nuremberg. Smaller than a traditional bratwurst and seasoned with marjoram, these sausages are enjoyed solo, on sandwiches, or accompanied by the traditional sauerkraut and potato salad.

A few years ago, McDonald’s rolled out their version of this classic, which they called the McNürnburger. It was made of three nürnburger bratwursts on a roll topped with mustard and crispy onions.

Occasionally, fast-food chains release products that are so unbelievably ridiculous, calorific, and frankly confusing that people can’t help but be interested. One of these items that gained popularity in Poland is the Cordon Bleu Burger. It was a regular burger patty topped with a patty made of fried chicken and ham. On top of it all, the regular sesame bun was swapped out for one with melted cheese on top.

No word on if this calorie-bomb actually tasted edible.

A burger that looks suspiciously like the McRib that really took off in Malaysia is the Prosperity Burger. It’s made of a long, thin beef patty dipped in pepper sauce, topped with raw white onions, and served on a sesame seed bun.

This limited-time sandwich came with a drink called the Prosperity McFizz, which is essentially just Sprite mixed with orange juice, as well as delicious-looking seasoned curly fries.

In Russia, they put much more stock in protein than we do here. One of the sides that you can buy with your burger or McChicken instead of fries or a salad are McShrimp. These are breaded, deep-fried shrimp.

Apparently, the side is served with your choice of six different sauces, which makes it a mini-meal all on its own.

In England, a roll or butty is one of the most popular on-the-go snacks. Filled with sausage, bacon, or even French fries, these rolls can be purchased at almost any fast-casual eatery, grocery store, or even gas station.

McDonald’s Bacon Roll is made with thick-cut English streaky bacon. It comes served on a floury bun accompanied by a thick, savory brown sauce.

Don’t worry. This Bubblegum Squash McFlurry isn’t some kind of weird fusion food. Squash is the Australian word for marshmallows.

This McFlurry is one of the sweetest things we’ve ever seen. Made with vanilla soft-serve ice cream that’s blended with electric-blue bubblegum syrup, the sweet treat is then topped with marshmallows. It’s ideal for children and those who literally cannot get enough sugar.

Another dessert option that looks more natural than the Bubblegum Squash McFlurry is the Apricot Sundae, which is popular in Turkey.

Made with a simple swirl of vanilla soft serve topped with a juicy apricot topping, it looks like the most perfect thing for a hot summer day. However, the unusual twist is that many people in Turkey buy this sundae, then use it as a dip for their chicken nuggets.

There are many ways to fill one of McDonald’s signature deep-fried pies. In China, one of the most popular options is their taro filling, which is made of bright purple taro root.

In North America, taro is a popular flavor for bubble-tea, but not much else. However, in China, it’s a very common sweet flavor and appears in many desserts.

A treat that makes many Brazilians think of their childhood is Ovomaltine, or Ovaltine as it’s known in the United States.

In order to capitalize on the popularity of this malted chocolate drink, McDonald’s created the Ovomaltine McFlurry. It takes a healthy scoop of the malt powder, then whizzes it with vanilla soft-serve, chocolate syrup, and chocolate chips to create a rich and interesting dessert. 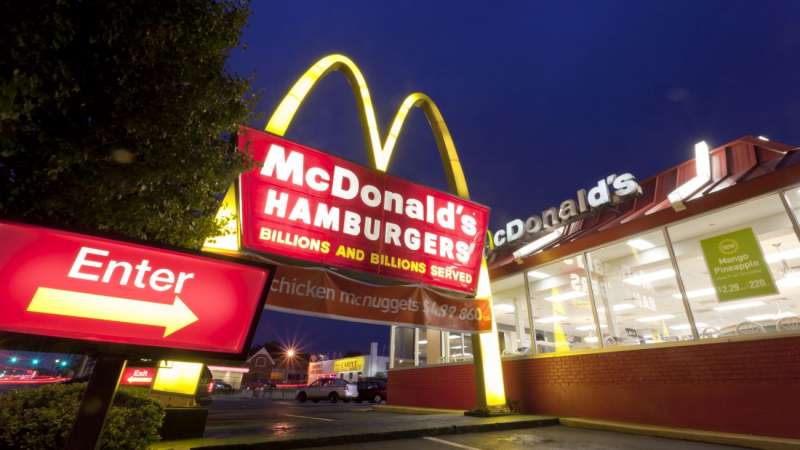