We buy their albums, tickets to their movies, and all the products, brands, and questionable colognes that they endorse. Surely that’s enough to quell the hungry egos of some of the world’s biggest celebrities. Well, not exactly.

You see, immortalization via cultural significance, world records, and millions of dollars sometimes isn’t enough. Tradition dictates that our celebrity idols need to be re-created in gold, bronze, wax, and stone, so not even the elements can dismantle the memory of their monumental rise to the top. So, thousands of years from now when aliens discover evidence of the lost civilization of mankind, they’ll be greeted by a horrifically inaccurate bronze bust of the great Christiano Ronaldo.

Today, we’re going to explore the head-scratching world of awful, celebrity inspired statues. On this list, artistic liberties, odd coloring, and straight-up awful designs abound. Ladies and gentlemen, I present to you the absolute worst celebrity statues from around the world.

Nirvana frontman Kurt Cobain didn’t just shine a spotlight on Seattle’s grunge music scene. He also put his hometown of Aberdeen, Washington on the map. Grateful for the tourism bump, the town declared February 20 “Kurt Cobain Day” in 2014. In addition to the announcement, they unveiled a statue of the late rocker.

Some call it a statue, while others call it an abomination. The statue depicts a tattered-jeaned recreation of Cobain, awkwardly holding an acoustic guitar and … crying? Yes, that’s a stone tear running down his stone face.

Michael Jackson may be the King of Pop, but he’s certainly got a long way to go before he’s crowned the King of Statues. In fact, Michael Jackson’s statue cred is so bad that we’re going to feature two of them today.

The first one sits outside of Craven Cottage in London, the home of the English Premier League’s Fulham FC. The decision baffled fans. They called the statue a laughingstock.

The second statue is nightmare fuel. Jeff Koons crafted this gold-plated art piece that features both the King of Pop and his pet chimp Bubbles. Honestly, the less said about this creepy thing the better. Let’s just move on with our lives, shall we?

Superstar soccer player Luis Suarez was honored in his hometown of Salto, Uruguay back in the summer of 2016.

The only thing flashy enough for one of the highest-paid soccer players in the world is a statue. And a pretty horrendous one at that.

Call me old school, but I believe that statues have no business being fully colored. Someone in Uruguay must have agreed with me. Because, less than a year later, the statue was vandalized for all to see.

David Beckham is no stranger to modeling campaigns, but the one that he did for H&M in 2012 was a far cry from a magazine print ad.

For the sole purpose of making men around the world feel bad about their bodies, David Beckham’s likeness was used to create a towering, solid silver statue. The statue was showcased outside several H&M locations in Los Angeles, New York, and San Francisco.

Of course, the statue only had boxer-briefs on. But, can you blame them? If I looked like that, I’d never wear pants again.

Another day, another soccer player statue. Sort of.

This bronze bust of Christiano Ronaldo is far from ordinary. The bronze statue of the Portuguese great was created by self-taught sculptor Emanuel Santos. It was meant to greet people as they arrived at the airport in Madeira.

The response to the sculpture’s unveiling was an artist’s worst nightmare. The art-piece was mocked on social media from all corners of the earth.

Eventually, the statue was replaced. The one that greets weary travelers now is much easier on the eyes.

We’ve all seen the famous photo of Marilyn Monroe fruitlessly attempting to keep her dress from blowing up over her head. Artist Seward Johnson saw it too. But, unlike the rest of society, he refused to settle for 2D, thus gifting humanity the Forever Marilyn statue.

It’s a remarkable recreation that certainly captures the starlet accurately. The statue does, however, raise some eyebrows. I mean, it’s all but impossible to walk by the statue up close and not see up Statue Marilyn’s skirt. I know at least one church that is not ok with it.

At one time, Diego Maradona was the biggest name in international soccer. These days, the spirit of Argentina’s national legend lives by way of YouTube highlight compilations and a series of truly awful statues.

There’s one in India that, according to more than a few online commentators, looks like someone’s grandma. There’s also one in Buenos Aires that’s only slightly creepy looking. Or how about the one in Argentina’s La Boca District.

Ah, the cost of stardom.

Jane Austen’s literary masterwork Pride and Prejudice has enjoyed quite the shelf life. The novel is over 200 years old, but to this day, it’s still wreaking havoc on Western culture.

In 2013, it re-entered the headlines for all of the wrong reasons. When a statue of actor Colin Firth’s portrayal of Pride and Prejudice character Mr. Darcy was unveiled in London’s Hyde Park, people definitely started talking.

Never mind the fact that it doesn’t look a lot like Colin Firth. My issue is with the statue’s continuity. I mean, the scene that the statue depicts wasn’t even written by Jane Austen. The scene was created for the 1995 BBC miniseries.

You’d think that a memorial statue to honor the late, great Steve Jobs would be a lay-up. Black turtleneck sweater, blue jeans, glasses — done and done. However, things were made much more complicated than they needed to be.

This statue was designed by Serbian sculptor Dragan Radenovic and was meant to illustrate Jobs’ contribution to computing. The statue features a floating head, the number one, the number zero, and a bunch of other stuff that I don’t quite understand.

I’m all for artistic liberties, but the statue does not inspire feelings of awe and wonder. Instead, it inspired me to reach for the Tylenol.

Kanye West is far from humble, but even he would find cause for concern with this statue that appeared in the streets of Hollywood in 2017.

An L.A. based street artist that goes by the name of Plastic Jesus unveiled a golden likeness of Kanye West. The statue has Kanye posed as Jesus with the crown of thorns and everything. The controversial golden statue was meant as a criticism on consumerism and our obsession with celebrity culture.

English supermodel Kate Moss was made gold in 2008. Artist Marc Quinn created this head-scratcher entirely out of 18-carat gold. The art piece, called “Siren”, is considered the largest gold statue made by man since the times of the ancient Egyptians.

Why is it so strange? Well, the statue depicts Kate Moss with her legs tucked behind her head in a sultry pose that commands attention. It’s an ode to the Greek goddesses of yore — and a pretty memorable one at that.

I just hope Kate Moss didn’t have to pose for too long for this one. I’d imagine it would be rather uncomfortable.

You don’t have to have been a child in the 1950s to recognize the name Lucille Ball. The red-headed starlet is certainly a household name. I Love Lucy, the show in which Ball starred, is iconic and still has legs in popular culture.

That’s why, in 2012, Lucille Ball’s hometown of Celoron, New York unveiled her likeness in bronze. Well, sort of. The statue that they unveiled actually didn’t look anything like the actress. Thankfully, the statue known on the Internet as “Scary Lucy” was replaced by a much more accurate depiction in 2016. 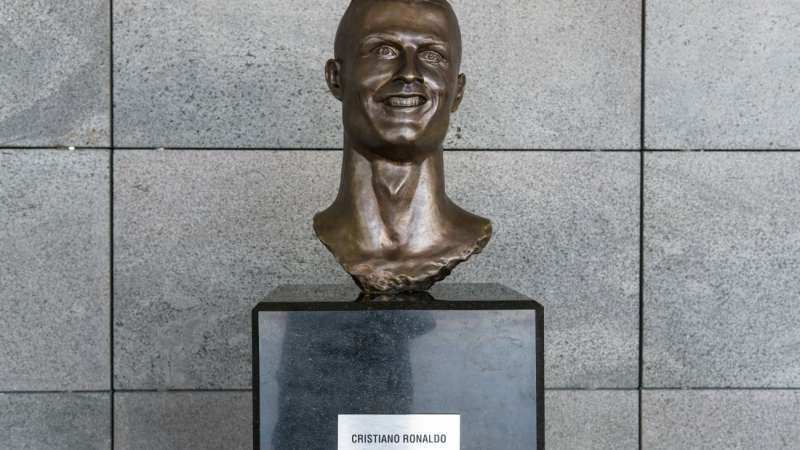