While the four-walls-and-a-roof structure is the traditional gingerbread house shape, in recent years ambitious chefs and confectioners have branched out from the standard structure in order to create their own masterpieces.

Christine McConnell is a well-known baker and artist who creates remarkable gingerbread masterpieces. A few years ago, she was commissioned by Food.com to make a gingerbread house and instead made a five-foot-tall gingerbread castle. The entire castle was illuminated by miniature lights (which were the only parts of the structure that weren’t edible), and featured miniscule decorations, like wreaths and stained-glass windows made of sugar.

There's no supports or inedible items (aside from the lights) in this 5 foot #GingerBread castle ???

A post shared by Christine McConnell (@christinehmcconnell) on Dec 9, 2016 at 5:35pm PST

Another amazing Christine McConnell creation was the gingerbread house that she made for the premier of the movie Miss Peregrine’s Home for Peculiar Children, directed by Tim Burton. McConnell made a gigantic replica of the titular home out of gingerbread, which featured a running clock which actually ran backwards, like in the film. The gingerbread house was modelled after the house where the movie was filmed and was displayed at the premier.

Tomorrow #MissPeregrinesHomeForPeculiarChildren comes out on DVD and BlueRay. I'm so grateful to @20thCenturyFox for bringing me into the marketing of this amazing film. Knowing such talented/incredible people were going to be seeing my work really motivated me to get better at what I do and I'll be forever grateful ❤️ #StayPeculiar @PeregrinesMovie #GingerBread ?

Although it’s not technically made of gingerbread, this incredible replica of the Hogwarts Dining Hall definitely merits a place on this list. This holiday-themed edible structure was made entirely out of fondant, and was created by master baker and teacher Sashiko Windbiel, who teaches fondant modeling workshops out of her NYC studio, Mimicafe Union.

Her Harry Potter-themed creation was made for the Bake Christmas Wish Fundraiser, and was eventually auctioned off to benefit the Make-A-Wish Foundation. The incredibly detailed edible structure featured miniscule plates, napkins, and food on all the tables, plus individual fondant sculptures of Harry, Ron, and Hermione. 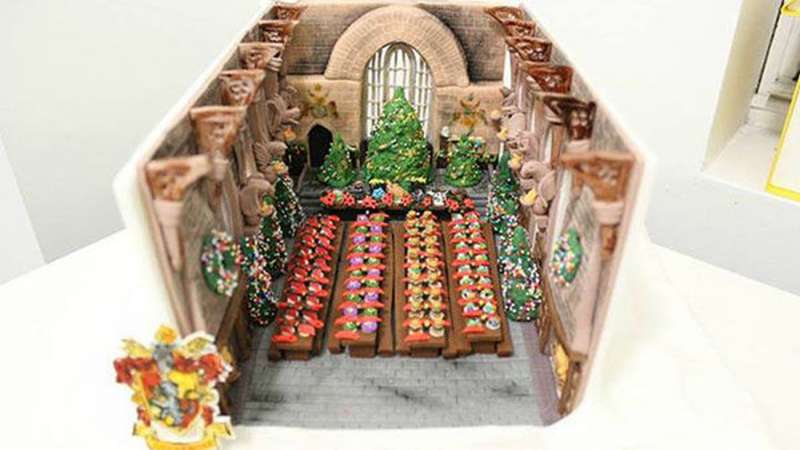